Pakistan still wrong about main cause of 'Fall of Dhaka’. By Hem Raj Jain 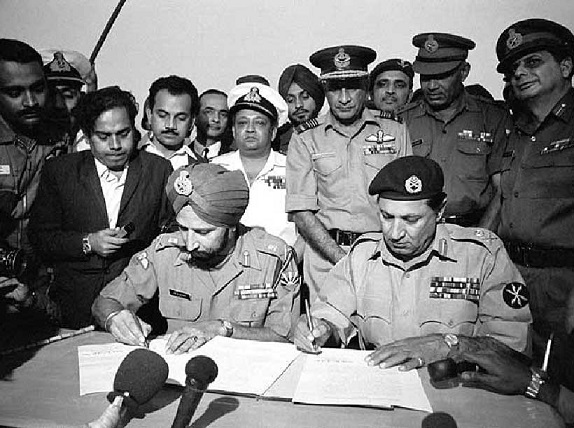 Without learning proper lessons from 1971 dismemberment, Pakistan may face serious problems in future too (ii)- Not merely military & political leadership but leadership of Islam in undivided Pakistan was mainly responsible for ‘Fall of Dhaka’ (iii)- Without making Islam in Pakistan the protector of democracy, secularism, federalism and right to self-determination, Pakistan can’t solve its problems (iv)- Pakistan should not forget that the last word on India’s immoral, illegal and illogical partition, is yet to be written.

This year too as usual on December 16 on the anniversary of the ‘Fall of Dhaka’ (which created independent Bangladesh on December 16, 1971 with the military intervention of India) print media and practically all the anchors and participants / commentators on TV shows in Pakistan expressed their grief, repentance and anger on ‘Fall of Dhaka’. But the analysis of Pakistanis of the loss of East Pakistan (present day Bangladesh) to West Pakistan (now Pakistan) is still superfluous which is coming in the way of going forward even for present day Pakistan. Therefore Pakistan should think about this issue seriously as mentioned below: -

(1)- First and foremost Pakistanis need to stop considering Jinnah & Islam as scared cow because most of the political problems which Pakistan has faced in the past or is still facing are mainly due to the simple reason that Pakistan has considered Jinnah & Islam beyond any scrutiny.

(2)- Pakistan should understand that the partition of India was a moral and legal fraud and inconsistent & incoherent in perception because there was no legal provision for population transfer in ‘Indian Independence Act’ or in any other law. But neither leaders of India namely Gandhi, Nehru, Patel etc nor of Pakistan namely Jinnah, Liaquat Ali etc demanded that the Hindus (including Sikhs) forcefully displaced from Pakistan and the Muslims forcefully displaced from India should be rehabilitated back in their respective cities / villages from where they were uprooted forcefully. Even the UK (and Lord Mountbatten who headed the partition and was Governor General of India after partition) did not protest / oppose this illegal population transfer which till date has thoroughly communalized the Indian subcontinent as it has emboldened the communal elements in these countries.

(4)- These leaders of India, Pakistan and UK did not raise the question of illegal population transfer (rather started opening refugee camps which was illegal & immoral) and never demanded rehabilitation of these so-called refugees for the simple reason that these unethical leaders knew that if rehabilitation is tried then the partition of India will have to be cancelled. But the leaders of India and Pakistan wanted power at any cost (including trifurcation of the motherland) and leaders of the UK wanted to get out of India at any cost. Now at least dual citizenship should be given to these about 160 million displaced due to partition (the Hindus about 20 % of the present population of Pakistan and Bangladesh and similarly about Muslims from India who were displaced to East & West Pakistan due to partition).

(5)- Not only India but Pakistan also behaved irresponsibly about ‘Instrument of Accession’ (IoA) regarding princely States. Though J&K signed IoA without military pressure but India never respected the mandate of the IoA about ‘plebiscite in united J&K’ (the condition incorporated in IoA by Mountbatten in view of Junagarh which was being assimilated in India on the basis of plebiscite and even Hyderabad which was taken by India keeping Hindu majority there in view). But Pakistan is not prepared for a plebiscite in united-J&K as per said IoA and unnecessarily talks about UN resolutions about it. Moreover Pakistan got IoA of Balochistan under military pressure. Both these issues of united-J&K and Balochistan have caused and are still causing lot of bloodshed and other problems for Pakistan.

(6)- Another important issue is about the basis of partition which remains the problem of present day Pakistan too. As is evident from the August 11, 1947 Presidential address of Jinnah to the Constituent Assembly of Pakistan that - “[You are free; you are free to go to your temples, you are free to go to your mosques or to any other place or worship in this State of Pakistan. You may belong to any religion or caste or creed -- that has nothing to do with the business of the State]” - Jinnah worked for creating secular Pakistan because for Muslims in Hindu majority India under the leadership of Gandhi, Nehru, Patel etc it had become impossible to practice secularism. (It is a different matter that Jinnah later on in Pakistan was swayed by communal forces). But it was on the basis of this argument of secularism (which Jinnah gave all along before independence) that Pakistan was created for Muslims where they were supposed to (as per Jinnah) practice secularism (because Jinnah knew that it, along with democracy, is the most powerful ideology of the contemporary world).

(7)- But Jinnah (the so-called champion of the Muslim cause) made fundamental mistake on two counts:-

(ii)- Jinnah did not realize that unlike Christianity (which, after more than a century of huge bloodshed for it, has accepted Secularism which is separation of STATE and religion) neither Islam nor Hinduism believe in such secularism. What to talk of theocratic Pakistan the de-jure secular India has now become de-facto theocratic India (though much milder than Pakistan) where Hindutva forces have damaged rule-of-law when it is applied to Muslima (about Babri-Masjid, Kashmir, CAA / threatened NRC, reservation, cow vigilante, ‘love-Jihad’ etc)

(8)- Whether a country is constitutionally secular or theocratic, any religion in it is the custodian of the values of the society (its followers). Therefore every religion should be alive to the basic needs of its followers and should  not leave entirely (on the political parties) the matters of fundamental importance & concerns to the people and instead (as a custodian of the values of the society) should keep a watchful eye on the important & vital activities of the STATE. But this is precisely here that Islam failed Pakistan which ultimately resulted in the ‘Fall of Dhaka”.

(9)- Whether or not Jinnah & supporters of separate Pakistan deliberately avoided these fundamental question of religion & State, one thing is quite clear that when in 1966 (5 years before ‘Fall of Dhaka’) it was publicly known that military ruler of Pakistan General Ayyub Khan had ordered a study about what will happen if East Pakistan is allowed to separate from West Pakistan then AT LEAST Islam should have woken up about the willful dismemberment of Pakistan (which came into existence on the basis of Islam).

(10)- But Islam could not keep West Pakistan (dominated by Punjabis) and East Pakistan (having majority and dominated by Bengalis) together for the simple reason that not only linguistic, regional and ethnic differences became too much for Islam but Islam in Pakistan could also not oppose the military rules . This problem of Islam in the then Pakistan is relevant in even present day Pakistan as is evident from the political turmoil goin-on in Pakistan in the form of ‘Pakistan Democratic Movement’ (PDM) which is not only challenging the incumbent government but also the military of Pakistan.

(11)- The Islam ( religion which only matters in Pakistan) should oppose military rule in any form and should support democracy, secularism and rule of law and federalism [where only martial subjects should be with center whereas all civilian subjects (including natural resources) should be with States / Provinces]. [Modern science & technology has given tremendous power to mankind. Democracy makes the country more powerful because it empowers every adult citizen and in this age of unprecedented advance in modern science and technology every human being is important as he / she can contribute in technology & science (material, or life related or social)].

(12)- Pakistan can take heart from two facts where it has has advantage vis-a-vis India:-

(i)- Pakistan [unlike India which never fought with China and faced humiliation from China in 2020 at Eastern Ladakh or (despite having  more powerful air-force) in 1962 war] does not like defeat in war and does everything to protect its sovereignty. Hence despite being a Muslim country (economically humble without petro-dollars) got nukes to keep much bigger India at length. As far 1971, it was a civil war between Muslim West & East Pakistan in which Hindu majority India intervened militarily on the side of East Pakistan (now Bangladesh) hence it can't be termed as war between India & Pakistan.

(ii)- Hindu society is hierarchical and in order to preserve it (unethically in a democracy) reservation is given in government services etc to majority of Hindus with demoralizing tag of oppressed (SC, ST) and backward castes. As demoralized people can’t run democracy India has no future whatsoever in democracy with such reservation.

Therefore Pakistan by learning lesson from ‘Fall of Dhaka’ should not only give-up theocracy & centralism and instead adopt secularism & federalism in its Constitution along with political right of self determination but should also rather mainly constrain Islam (through its religious leaders) to become a true custodian of the values of the society / its followers as per the requirement of the contemporary human-rights-friendly modern, progressive and powerful world.