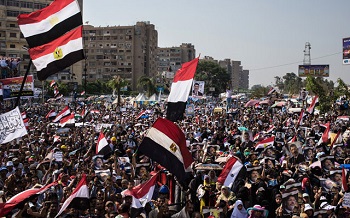 Ten years after the Arab Spring in Egypt and the welcomed removal of the late Hosni Mubarak, a simple question can be asked. What have Egyptians gained from the bloodshed of the January 2011 uprising? The answer is nothing – the Sharia second amendment of the constitution remains, a military president like the four before him has extended his term, and the election process is still fraught with fraud and unreliability.

Six years after the deadly protest of a street vendor that led to the toppling of the Tunisian president triggering the Arab Spring of January 2011 in Egypt, an Alexandrian taxi driver in protest soaked his body with gasoline and lit a match. According to doctors, he burned 95% of his body. Eyewitness accounts heard the man scream, “Sisi, I need to eat.” The victim acted alone, and the media was mute. This striking commentary on Al Sisi’s Egypt of 2017 was officially suppressed.

The Alexandrian taxi driver set aflame did not lead to regime change for Egypt or anywhere else. His action was genuine and organic. In contrast, the single Tunisian street vender of 2011 protesting unemployment sparked negative domino-effect regime change in multiple countries – an “AstroTurf” catalyst for major protests and particular outcomes. Egypt, for one, fulfilled this plan through Tahrir Square protests bringing about a Brotherhood government and the military president to follow – the final negative regime.

Al Sisi is in his third term of office and Egyptians lack basic living standards. The burn victim was a spectacle of silent suffering representing the majority of Egyptians dealing with high costs of goods and no jobs. To protect his own position, Al Sisi represents a blockade between the people and MB rule sparing Egyptians of that while failing to present any positive way forward for the country. Under his administration, the military continues to enrich itself as a state within a state.

During and after his election campaign, Al Sisi made lofty promises that can be described as impressive and ambitious but have no basis in reality, such as:

﻿--Conversion of 4 million acres of desert land to agricultural land, ﻿ adding more than 50 percent of the total agricultural lands already in existence. This is at a time when Egypt faces an acute shortage ﻿of water resources.

Al Sisi himself estimated these projects to cost about $140 billion in a country where the gross national income did not exceed $219 billion, according to World Bank data for 2012 when he announced these plans. Furthermore, enlightened Egyptians have seen through Al Sisi’s public relations ploys used to enhance his image and overcompensate for his failures. Moreover, Egyptians -- dissidents, striking workers, human rights activists, journalists, artists and feminists -- have faced silencing due to Al Sisi’s “fight against terrorism.”

Behind the scenes -- how the Al Sisi regime came about

On February 11, after the eighteenth day of daily protests, Omar Soliman (former head of Egyptian intelligence) and the sudden, vice-presidential appointee to Mubarak (his first and only VP) announced Mubarak’s resignation and Mubarak’s decision to assign SCAF (Supreme Council of Armed Forces) to run the country. Such was enough for the people to stop protesting and corral into a new era of confusion, for Mubarak’s decision was an illegal one.

Facilitated by Soliman, there was a plan executed for Egypt upon the departure of Mubarak. SCAF became the interim management and a stepping stone to an overt Islamist takeover. Cooperating with SCAF were the Muslim Brotherhood (MB) and sympathizer Barack Obama of the American administration.

Archived news accounts from that time reveal that America, through Egypt’s American embassy, was communicating with the Muslim Brotherhood Morshid (head) about the viability of a Brotherhood presidency and agreeing with and supporting this idea.

Statements from a dialogue between the embassy and the Morshid were circulating in newspaper and magazine articles and can be paraphrased as the following: Directed to the Morshid, the American staff asked about the Brotherhood plan for the post-Mubarak future, and the Morshid answered, “We want to control the Parliament by two-thirds." The same staff member replied, “What are you talking about? How can you miss the opportunity for the presidency?”

Did America want this for Egypt? If so, did this single reported exchange reveal a hidden truth that America was instrumental? Egyptian commentaries believed so. America and the Brotherhood were successful; Morsi was installed as Egypt’s fifth president in June 2012 and remained for one year.

SCAF prepared for a smooth transition to the MB. It played a decisive role by supporting the insistence of the Muslim Brotherhood and other Islamic fundamentalists who demanded a new constitution before parliamentary elections took place.

On February 15, just four days later, the Committee for the Constitution Amendment was formed to write a new constitution. It was led by two Islamic fundamentalists, Tariq Al-Bushra and Sobhi Saleh, while the true secular liberals were ignored.

The majority of Egyptians did not protest in the streets for religious fundamentalism to govern, so they came out again to protest Morsi after ten months. Meanwhile, a few months prior on August 12, 2012, Morsi replaced his defense secretary, Tantawy (former head of SCAF), with Abdel Fattah Al Sisi, the head of military intelligence and a lower-ranked member of SCAF. Was Morsi’s decision his own idea or was he led to make this chessboard move leading to his eventual takedown? Perhaps Morsi already secretly conceded the presidency through coercion and was forced to position Al Sisi in the limelight.

This is how Al Sisi enters the political scene. In less than five months into his appointed position, Al Sisi arrested President Morsi and jailed him for the MB’s cause of unrest with the people, beginning his own political career. With removal and arrest of the Brotherhood president, Al Sisi was ready to return the military to power in Egypt.

However, for Egyptians, General Al Sisi would not have been the natural or logical choice for office. By the time the Brotherhood president brought him into the government, Al Sisi was notorious in the eyes of many of the people.

Al Sisi’s reputation had been tarnished by two previous public events. The first was his role in the controversial “virginity tests” when he ordered the military to administer them to female protesters under the guise of protecting girls from rape and soldiers from accusations of rape.

The second event that seriously discredited Al Sisi was his responsibility for the Maspero massacre where thirty Copts were killed during a peaceful protest. Immediately, rumors circulated between Copts that Al Sisi had ordered it. This was later proven during Al Sisi’s second term run for president when leaked military documents showed that Al Sisi was the one who issued the order for military use of tanks to crush protesters.

Like his predecessors in Egypt’s highest office for decades before him, former military general Al Sisi is a president sourced from Egypt’s military complex, which has produced presidents since King Farouk ruled the kingdom. In this sense, Egypt’s military holds the office captive. For example, through its powerful influence, the military had been capable of discouraging or even preventing the presidency of the non-military son of Hosni Mubarak selected by his father.

Today, Egypt’s economy is subject to international imperialist interests more than ever before with IMF funding indebting the country for military projects not benefiting the people. The level of poverty is more profound than ever before adding to overall discontent. ﻿