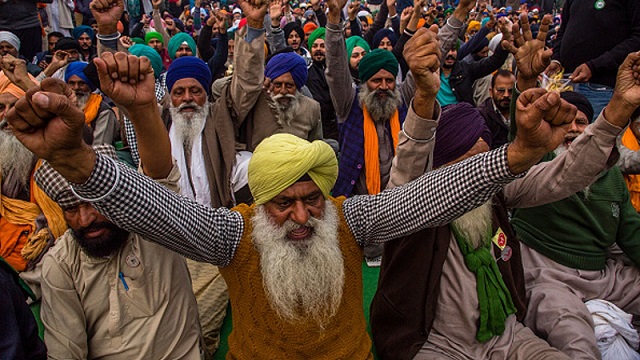 There are two following burning problems (farmer’s agitation in India and mini-SAARC problem) in Indian subcontinent which need urgent solution and which the Sikh community can easily help to resolve :-

(i)- Out of about 1360 million total population about two third of India is fully or partly dependent on agriculture income. Hundreds of thousands of farmers have been committing suicide for the last over two decades (due to nonremunerative prices of agriculture produce) but no body was giving worthwhile attention to it. Only when three controversial farm laws were enacted in 2020 [which farmers from Punjab considered against their interests because they thought it will damage the ‘Minimum Support Price’ (MSP) and APMC (agro-markets) system which have benefited Punjab farmers for more than half century since green revolution] hence first they agitated in Punjab and then in November 2020 came to Delhi and along with the farmers of Haryana are carrying out Dharnas (sit-ins) at Delhi borders in which farmers of Western U.P. (and some from Rajasthan etc) have also joined.

(ii)- The farmers had been agitating all over India in smaller numbers (including at Delhi) hence it did not attract the attention of the  government & the people but this time they attracted the attention for the simple reason that agitating farmers are in large numbers (hundreds of thousand) and they have encircled India’s capital Delhi. This became possible only due to one reason that the Sikhs (through the infrastructure of Gurudwaras which provided free Langar etc to the agitating farmers)  provided assured support which gave crucial initial momentum to this farmer’s agitation.

(iii)- These agitating farmers gave first preference to repeal of said 3 controversial farm law and kept legally enforceable MSP at second priority because they already have been getting MSP through APMC system in Punjab and Haryana (in contrast to the farmer’s of rest of India who do not get the benefit of MSP to that extent). Hence the farmer’s from rest of India are more interested in ‘legally enforceable MSP’.

(iv)- Out of 40 farmer's trade unions in 'Samyukta Kisan Morcha' (SKM) 32 are reportedly from Punjab. Notwithstanding large crowds at Maha-Panchayats around Delhi, the Sikhs know that despite farmer's Mela at Delhi border the no-confidence motion against Haryana Govt has been won by ruling party BJP on March 10 and in Western UP if the BJP government releases payment for sugar cane, the overly inflated balloon of such Maha-Panchayats will puncture in U.P.. Hence the Sikhs also know that they will have to give up their policy of confining farmer's agitation to Delhi borders and this farmers agitation can succeed only when (instead of depending on support from merely Haryana & Western U.P.) they take support from farmer's of all over India on the issue of  'legally enforceable MSP'

(v)- For that, the farmers from rest of India also need to carry out Dharnas at all the Tehsil / Taluka, District and State headquarters. These Dharnas all across India by farmers can happen only when Sikhs provide similar infrastructural support of Langar etc which they can easily provide because Gurdwaras are there all across India and they can open more Gurudwaras, if needed, for this purpose.

(vi)- But there is one big hurdle in such an approach. The Sikhs do not have a political party which can reap the benefit of such Sikh support to farmers from all over India for the success of the on-going farmer’s agitation. The existing political party the ‘Shiromani Akali Dal’ (SAD, which is supporting this farmer’s agitation) is generally considered sympathetic to Panthic interests of the Sikhs (also by having majority of its people for most of the time in the management body of the ‘Shiromani Gurudwara Prabandhak Committee’ at Golden temple, Amritsar the Vatican for Sikhs) but it has one serious drawback which stops it from spreading in rest of India.

(vii)- Like other political parties with religious names (like Muslim League or ‘All India Majlis-e-Ittihadul Muslimeen’ sponsored by Muslims) the SAD also does not appeal to Hindus which is a preeminently majority community in secular India. Hence only when either the SAD changes its name to some secular name or the Sikh community launches some new political parties with secular names then only the Sikhs can increase their Gurudwaras all across India (with increased number of followers of Sikh religion all across India) and can get huge membership (not merely from farmers) for such secular name parties sponsored by Sikhs.

(i)- The partition of India & Pakistan in 1947 was legally and morally fraud which has communally poisoned the Indian subcontinent and two more factors (i)- Afghanistan problem post 9/11 which has caused the presence of US forces in Afghanistan and (ii)- The threat of authoritarian Chinese Democracy to liberal Western Democracy (which India is also practicing) has created unprecedented strategic & military problems for India as mentioned at https://www.pakistanchristianpost.com/opinion-details/3781

(ii)- The USA has failed to understand that in the modern world only those countries can achieve peace, justice & prosperity where its people themselves endeavor to practice secular and human rights friendly-democracy (with universal adult franchise). Hence the efforts of Secretary of State Antony Blinken (mentioned in his letter to President & Chairman of Afghanistan apprising them of his intentions to ask the UN to convene the Foreign Ministers and Envoys from Russia, China, Pakistan, Iran, India and the USA to discuss a unified approach to supporting peace in Afghanistan and also to involve the Government of Turkey) are not going to bring any peace in Afghanistan. Because it does not take the democratic efforts of the people themselves of Afghanistan into consideration  (which, in the given situation, is possible only through said mini-SAARC) rather on the contrary Secretary Blinken / Biden-administration are still wrongly depending even on the governments of such countries ( Russia, Iran, Turkey and China) which directly have nothing to do with the people of Afghanistan & this mini-SAARC.

(iii)- In an irresponsible hurry to leave India the UK paved the way in 1947 during partition of India & Pakistan for the killing of ~ 1 million and forceful displacement of ~ 15 million in the most gory situation. Hence it will happen again if the USA will do the same in Afghanistan in a hurry to withdraw (as has been informed by Secretary Blinken in this letter) the US-forces from Afghanistan by coming May, 1 and which will have adverse implications for India too.

(iv)- But India does not do anything for realizing said mini-SAARC for the simple reason that rest of India is not enthusiastic about this mini-SAARC. Only the Sikhs can be because they conquered or ruled (during the period of Banda Singh Bahadur and Maharaja Ranjeet Singh during 18th and 19th centuries) the territories north of Delhi up to some part of Afghanistan (including Haryana, Delhi, Western U.P, Himachal Pradesh, united-J&K, Indian and Pakistan side of Punjab, KPK). Therefore said national political parties sponsored by Sikhs with secular names will go a long way in mobilizing & motivating rest of India for realizing this mini-SAARC (of India, Pakistan. Bangladesh and Afghanistan).

It is hoped that the Sikh community will rise to the occasion in the interest of bringing peace, prosperity and justice to the entire mini-SAARC region by launching national political parties with secular names.