‘Raj Karega Khalsa’ can acquire meaning in mini-SAARC region, if Sikhs work for it. By Hem Raj Jain 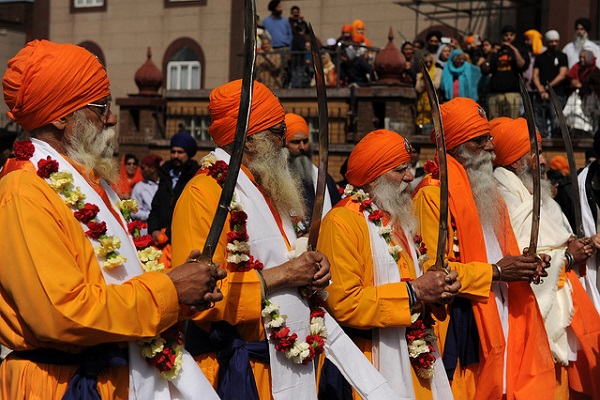 The Khalsa (to be pure, to be clear, to be free from) tradition was initiated in 1699 by the Tenth Guru of Sikhism, Guru Gobind Singh Ji. Its formation was a key event in the history of Sikhism. The founding of Khalsa is celebrated by Sikhs during the festival of Vaisakhi . The Khalsa is created and initiated as a warrior and the Khalsa provided a political and religious vision for the Sikh community. Hence ‘Raj Karega Khalsa’ (Khalsa will rule) is a meaningful slogan as it is not a mere coincidence that after the advent of Khalsa the Sikhs conquered or ruled over territories from Delhi to the gate of Afghanistan.

The providence has again provided an opportunity to Sikhs community to realize (through rule) the historic mission of  bringing peace, prosperity and justice to the entire mini-SAARC region (including succor to agitating farmers in India) as mentioned at [

https://www.pakistanchristianpost.com/opinion-details/3783 ] if the Sikhs do the following in view of given below:-

(1)- First & foremost the Sikhism has to understand that the religion (even in a secular country) is the custodian of the values of the society. Modern society can’t progress unless it practices secular democracy because that is the only way the mind becomes free (from the coercion of military power and  religion) which is sine-qua-non for the progress of powerful modern science & technology. Hence religion (Christianity) is there and relevant in secular West too (including in the USA)

(2)- In India all the religions have damaged secularism by their acts of either commission or omission. As far as Hinduism (through Hindutva forces), by its acts of commission it has damaged secularism which is widely documented. As far as Islam, the Indian Muslims damaged secularism through their acts of omission of not filing necessary writ petition in SCI. As far as Christianity, the people have not realized that they are maximum responsible for damaging secularism also in India because the Christians are running the global political system (also through the UN with human rights related laws like ICCPR etc) but Christians never cared to ensure the implementation of these laws even after a Christian priest and his son was burned alive in 1999 by Hindutva forces in Odisha of India. As far as Jains, they succumbed to 'Dadagiri' of Hindus (during Chief Ministership of Modi) when at Jain tirth Girinarji in Gujarat the Jains refused to  fight court cases  properly against the forceful eviction of Jains from the Neminath Ji Toonk . As far as Zoroastrians (Parsees),  though they are a powerful community but have preferred (for the reasons best known to them only) to remain as passive spectators to whatever happens to Indian State.

(3)- The Sikhs also have been wanting in defending rule-of-law (secularism) and in opposing immoral & illegal partition of India:-

(i)- Unlike Hindu Bengalis and Hindu Punjabis, the Sikhs conquered and ruled the territories from Delhi to gateway of Afghanistan hence the Sikhs should not have agreed to the Partition of India (of their legitimate territory) especially by division of Punjab and creation of West Pakistan. Had the Sikhs opposed the partition of India & Pakistan (especially West Pakistan) many Gandhis, Nehrus, Patels Jinnahs etc couldn’t have succeeded in bringing West Pakistan into existence. Even the Britishers wouldn't have opposed (militarily) such stand of the Sikhs for the simple reason that the Sikh warriors had given a lot of blood for Britishers not only during World War I & II but also during the 1857 uprising (which crucially saved the British empire in India) .

(ii)- In Punjab during the run-up to 'Operation Blue Star' (when Akal Takht in Golden Temple was damaged during military operation in 1984), the governments (Center & State) were certainly responsible for not taking proper action under criminal laws against terrorists which deteriorated the situation in Punjab but Sikhism also did not condemn these terrorists in clear terms and at the top of it the Sikhism allowed the terrorist to entrench themselves within the premises of Golden Temple (Akal Takht). But now the providence has provided an opportunity to Sikhism to establish secular democratic rule in the mini-SAARC region  which will bring peace, prosperity and justice to the entire mini-SAARC region (including by bringing succor to agitating farmers in India) if the Sikhs do the following.

(4)- The ‘Khalsa will Raj Karega’ only when the on-going farmers' agitation is handled properly by the Sikhs. The SKM of 40 farmer’s trade unions is following the wrong policy of electoral approach where it is trying to merely dislodge the BJP from power or to defeat the BJP in all coming elections namely to local bodies, Vidhan Sabhas and Lok Sabha. The SKM does not understand that even if BJP is removed from power no political party in India can bring legally enforceable MSP that too where the government will purchase all the items (23, which can be increased to about 40 by including fruits, vegetables etc) because no political party is willing to recover Rs 1,000 Income Tax from about 1 million fake farmers [though this huge State capital only can finance the ‘Comprehensive PDS’ (CPDS) and other welfare programs of the center government].

(5)-. The only solution is said Dharnas by farmers  (at all the Tehsil / Taluka, District and State headquarters) which are about 7,000 Dharna sites and then ‘Jail Bharo Andolan’ (under the banner of political party sponsored by Sikhs) to get ‘legally enforceable MSP’. There will be on an average about 500 persons at each Dharna site and for 100 days Dharna if Rs 100 are needed for each dharna giving farmer for his food (through Langar to be provided by Gurdwaras) then it will cost Rs 35 Billion. There are about 30 million Sikhs (about 6 million families) all over the world out of which about 83 % live in India. If each family donates Rs 6,000 for said  Langars then it can easily provide the required funds.

(6)- The Sikh NRIs can easily give this amount of Rs 6,000 per family which is about $ 65 and which is nothing for them. As far Sikhs in India they need not give Rs 6,000 in cash rather they themselves can give it in terms of food items (grains, dals, vegetables, cooking oil etc) or can collect it from the farmers of the areas where Dharnas will be carried out. But Khalsa will succeed in their mission of Raj Karega in mini-SAARC, only when (through US-NRIs or otherwise) they sort out the following matters with the USA (which is absolutely necessary in order to realize the said mini-SAARC):-

(i)- The  USA should be told in clear terms that said mini-SAARC does not believe in exclusive private capitalism and along with private-capital the State-capital will also be deployed profitably (almost no-profit no loss) & efficiently and the said huge State capital of over Rs 1,000 Trillion will be deployed in three sectors namely food (through CPDS), health-care and housing for at least two third of the population who are economically humble (and the increase of service sector in the economy requires increased mobility of the people hence more rented houses across mini-SAARC which only State can provide at reasonable / nominal rent). These three sectors will be strictly the internal matter of the said mini-SAARC and no international treaty will be entered into, regarding these three matters.

(ii)- In principle the mini-SAARC would deal not so much with the Americans but with the Americanism through US-sponsored UN (or any other US sponsored world body) which implies that the rule-of-law (national & international) will be the guiding principle in deciding the relations between said mini-SAARC & the USA.

(iii)- The said mini-SAARC (with said huge State-capital of Rs 1,000 Trillion) is quite capable of dealing with China on its own (by working with said US sponsored world body) and will not need forums like QUAD etc to handle China.

(7)- For realizing this mini-SAARC, first of all secularism will have to established in India by filing following writ petitions in the SCI by the political party sponsored by the Sikhs :- (i)- Legally expected restoration of status-quo-ante of Babri Mosque which was demolished in presence of the observer of the SCI in 1992. (ii)- Plebiscite in united J&K as mandated by IoA by getting entire territory (including and especially with Pakistan) free from out-siders (along with working for plebiscite in Balochistan who’s IoA, unlike IoA of J&K, was obtained by Pakistan under military pressure and against resolution of its Parliament / Jirga) (iii)- For repealing CAA and for dual citizenship for about 160 million Hindus & Muslims of India, Pakistan and Bangladesh who were violently displaced due to illegal population transfer and which has communalized the entire Indian subcontinent (iv)- In order to facilitate said mini-SAARC for getting border dispute with China settled through 'UN Judicial Commission' because dispute with China (unlike dispute with Pakistan, which is political) is legal and which China can’t refuse being a permanent member of the UN (v)- Getting all reservation laws quashed under article 13 & 14 of the Constitution which are discriminatory against Muslims (vi)- Getting anti-conversion laws (which are against the fundamental  right to freedom of religion) quashed because these  prevent conversion by absurdly saying that it is done through coercion, allurement, love-Jihad etc. (vii)- Getting anti- cow-slaughter laws quashed under article 13 & 14 of the Constitution as these are discriminatory because it protects religious sentiments of only Hindus.

(8)- For generating huge State-capital the following writ petitions too in the SCI  will have to be filed by the political party sponsored by the Sikhs (i)- For quashing unconstitutional FRBM ACT and forfeiting all the public debts of Union & States governments which are above their consolidated funds in violation of Article 292 & 293 of the Constitution (ii)- For  recovering about Rs 1,000 Trillion income tax from about 1 million fake farmers.

It is hoped that the Sikhs all over the world will impart meaning to ‘Raj Karega Khalsa’ in the region of said mini-SAARC by doing as mentioned above in the interest of bringing peace, prosperity and justice to this region.