Pakistan can easily handle second wave of Corona, without stringent measures, by learning from mistakes of uncaring India. By Hem Raj Jain 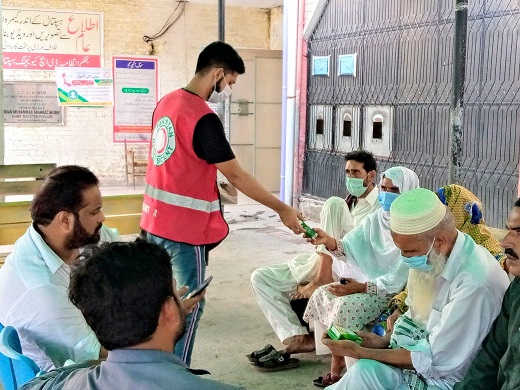 Pakistan needs only four things namely - 24x7 website by Pakistan government, 24x7 website by State governments, physical distancing with masks and temporary beds near oxygen producing plants (if necessary) (ii)- Existing vaccination program should continue rather should be accelerated to the extent possible.

In Pakistan many, including through the media, are trying to justify the use of the military for handling the second wave of Coronavirus (so-called more severe) by giving an example of India where presently there is chaos allegedly due to lack of oxygen, hospital beds, medicines etc. (even black-marketing of beds, oxygen cylinder and medicines including of those medicines like remdesivir which as per experts is not needed for Corona  but still government is saying it is needed for Corona treatment)

Many senior doctors / specialists from India and Western countries have appeared on TV channels and have told repeatedly that what is presently going on in India is ridiculous because this so-called menacing second wave of Corona could have been easily handled and managed by India (as given below) and even now India can do it but not doing so. At least Pakistan should avoid the same mistakes and should do the following instead of subjecting Pakistanis to stringent measures (like military deployment and other measures which Pakistan government is reportedly envisaging): -

(1)- Doctors / specialists have been and are saying that generally there are four stages of Corona which means there are four categories of Corona patients. For first category mild fever comes for 5-6 days in which 80 % gets cured automatically like in normal mild fever conditions. Out of the remaining 20 % with fever of 101-102, oxygen is not needed for all and 18 % (the second category) can be treated with normal medicines like (more or less) in influenza. Only for third category of  2 %  oxygen is required but most of them (1.5 %) can be treated at home with oxygen.  Only 0.5 % need hospitalization where ventilations and other life supporting facilities with specialist doctors are needed and are available.

(2)- This means that 99.5 % of Corona patients (even of this second wave) can be treated at home by community doctors. Out of all the doctors, in India 95 % are community doctors in metros, cities, towns, villages and only 5 % are in hospitals. But India foolishly has practically eliminated the role of community doctors (by saying that every corona patient has to come to hospital and will be treated only after testing if he is found positive for which India has no capacity / facilities of either proper testing or for beds in the hospitals). Even the patients and their family members are beaten (as shown on prominent TV channels) by police if a Corona- patient does not go to hospital. This is the reason that there is an avoidable and manmade chaos in India. Even the requirement of oxygen increases due to stress in the patient when he hears the non-availability of said essentials.

(3)- As far as oxygen is concerned India is unnecessarily trying to transport oxygen long distances from plants to hospitals in other States. Instead, India should have established temporary sheds (of 1,000 beds or so which can be constructed in a day) near such plants (like steel plants, sugar plants, power plants etc which produce oxygen and always have surplus stock of oxygen) may be at a distance of 1 kilometer or so from such plants, with pipeline, header and feeder branches with oxygen regulators where patients of said third category can get oxygen (in case they don’t get oxygen cylinders at their home).

(4)- The main reason of second wave of Corona becoming so menacing in India is that India never bothered about physical distancing with mask and thought that Corona has gone and government even started boasting about handling corona successfully and allowed people to assemble as crowds in religious celebrations (maximum in Kumbh where millions assembled), political rallies in elections, marriage ceremonies, travelling in crowded public transport, market places etc.

(5)- Pakistan has also allowed such crowds hence instead of bringing military to control Corona or to think about imposing lockdown in Pakistan, the government should only ensure physical distancing and mask not only in public places but also in theaters, hotels etc (without closing such businesses) and even in industries without too much involving the security forces in private places / premises and instead depending upon inspectors who can create challans (under law, may be specially legislated for Corona). In a nutshell Pakistan should not unnecessarily disturb the normal life in Pakistan by taking the excuse of the second wave of Corona because it is easily manageable with some sensible & responsible measures (which India failed to do).

(6)- Pakistan should also launch two categories of websites. One 24x7 website by Pakistan government where people will bring their complaints and problems about non-availability of oxygen, community doctors, medicines, hospital beds etc. and where the Pakistan government will guide / educate the people how not to panic and behave sensibly when they and their family members and friends are having Coronavirus

(7)- The second category of website is to be by all the States where (in addition to discharging the above mentioned functions of first category of Website) the State governments (i)- Will appoint one doctor (as a community doctor in case people are unable to find / hire a community doctor in their areas) and will guide the people how to get the free help of such government-appointed-community-doctor in their nearby area at a few kilometer distance and (ii)- Will guide the people how to take the benefit of said temporary oxygen beds near Oxygen producing plants (if needed).

It is hoped that without getting overwhelmed and carried away by the man-made scary situation of Coronavirus in India, the Imran government [which sensibly realized the importance of keeping the life of the people (especially the economic activities of the economically humble people) as normal as possible during first wave of Corona pandemic] will again show the wisdom of keeping the life of the people as normal as possible by taking the above mentioned four measure for satisfactorily handling the second wave of Coronavirus.