In address to Congress, Biden unconvincing about China and other foreign policies. By Hem Raj Jain 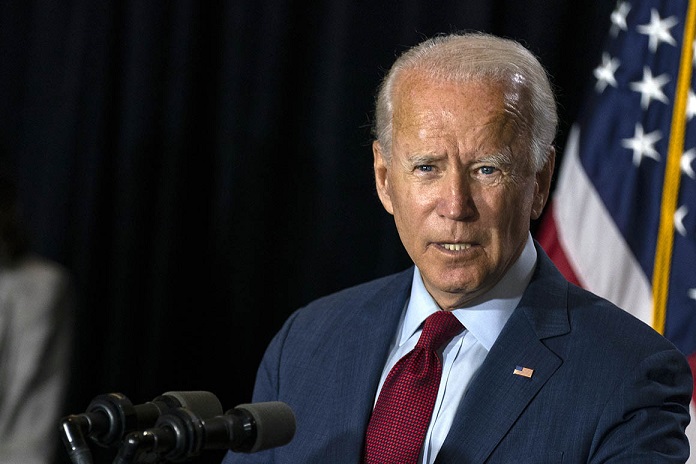 While letting China get away with Corona matter, Biden can't convince the USA & world that he can take-on China (ii)- Without believing in secularism by bringing Hinduism & Islam in competition with US-Christianity, Biden can't succeed at other foreign policy fronts.

No doubt no US President can hope to be successful on foreign fronts (economic, political, strategic and military) unless people in the USA are prosperous and happy with his / her policies and the US-economy is in excellent shape. Hence in his April 28 address to Congress

(as given at https://www.usatoday.com/story/news/politics/2021/04/28/joe-bidens-speech-congress-read-full-transcript/4883244001/ ) when President Joe Biden talked about the matters (which will further improve the internal situation of the USA) it is welcome and understandable namely - [ successful vaccination program against Covid-19 Corona, $ 15 minimum wages, boost to R&D, proper drinking water to every citizen, connecting every American with high-speed internet,  modern power grid, production of more electric vehicles and batteries and other measures for better environment, Americans to buy more American goods because will be competitive as there will be more technological change in the next 10 years than  in the last 50 years by dominating the products and technologies of the future like advanced batteries, biotechnology, computer chips, and clean energy, advanced Research Projects to prevent, detect, and treat diseases like Alzheimer’s, diabetes, and cancer,  American Families Plan with four measures (guarantee of 12+4 four  years of free public education for every person in America, affordable child care, 12 weeks of paid family and medical leave and money directly into the pockets of millions of families), reducing the prescription drug prices, tax reforms etc].

On the domestic front two issues are still not addressed satisfactorily namely guns and illegal immigrants. Though Biden talked about problems of guns and mass shooting but its solution lies in the ‘fundamental right to gun’ to every adult (who so ever wants it) with non-lethal bullets (because women going out of home in larger numbers for education and economic freedom will, like other vulnerable sections of the society. need guns for self defense. As far as illegal immigrants, Biden asked the Congress to pass the bill which he has recommended hence it is better to wait what comes out of it (in its original or amended form).

But on foreign policy front, Biden has failed miserably,  as explained below:-

(1)-  About China, Biden is not convincing because like Trump-administration the Biden-administration is also afraid of taking any action against China about Coronavirus. The leader of the free world the USA is supposed to move the UN for investigating whether Coronavirus is natural or manmade. If later, then which laboratory made it and then fix the responsibility of countries which caused the spread of this virus in the rest of the world by their acts of commission or omission. Then establish protocol & SOP for such laboratories world over under the UN regime so that this does not happen again in future because the survival and normal life of the entire mankind is at stake. If China or other countries oppose this investigation by using Veto then the USA should launch another world body (by dissolving the UN or otherwise) as the USA did after World War II when it dissolved ‘League of Nations’ at Geneva, Switzerland and launched the ‘United Nations’ on the soil of the USA at New York.

(2)- Like previous US-administrations, the Biden-administration also does not understand the more serious threat from China. When Biden said in this address that to win the 21st Century we’re in a competition with China, Biden erroneously thinks that merely by increasing economic & military power the USA can win. Biden does not realize that the ‘authoritarian Chinese democracy’ will win even if it doesn’t do anything but the USA will lose if it doesn't do anything to make ‘Liberal Western democracy’ successful especially in developing world which is already impressed by ‘authoritarian Chinese democracy’ due to spectacular economic progress of China (despite being an Asian country).

(3)-  The USA doesn’t want to understand that secularism is the most important rather crucial part of western democracy (for which the West gave immense lives & blood especially in 16th and 17th century in Europe). But about 3 billion people (Hindus and Muslims) have failed to practice secularism. The case of two nuclear countries India and Pakistan is quite educative in this regard. The situation in Pakistan is politically explosive due to theocracy (as mentioned at

https://www.pakistanchristianpost.com/opinion-details/3809  ) which will further deteriorate the situation in Pakistan including its economy.

(4)- As far as India is concerned in addition to rendering 15 % of its population (the Muslims) at a level of second class citizens (by way of destroying rule-of-law regarding matters related to Muslims, like Babri. Masjid, Kashmir, CAA, Cow vigilante, love-Jihad etc) majority of Hindus have been kept at oppressed (SC / ST) and backward level (by giving them reservations with such demoralizing tag). With the result two third of India the farmers (who are partly or fully dependent on farm income and who have been committing suicide in hundreds of thousands due to nonremunerative prices of agriculture produce) are fighting for survival hence agitating for ‘legally enforceable minimum support price’ since November 26. 2020 at Delhi border and other places in India. It is no mere coincidence that these framers are mostly from oppressed and backward castes of Hindu order.

(5)- In addition to said farmer’s unrest, now the on-going pathetic condition of Indians (where their overwhelming majority are second & third class citizens out of religious prejudices of Hinduism) can not only be gauged (due to acute shortage of hospital beds, medicines, oxygen cylinders etc during second wave wave of Corona-virus) easily even from the international media (including from the USA https://www.washingtonpost.com/world/2021/04/27/india-covid-surge-faq/ ) but it has elicited such criticism of the Indian government in such terms that it has shocked India, beyond words hence Indian High Commissioner had to write to ‘The Australian’ as reported at https://theprint.in/india/malicious-report-says-india-to-australian-paper-for-criticising-modi-for-covid-apocalypse/646639/

(6)- In a nutshell unless Biden ensures true secularism in the developing world the USA can’t expect the victory of ‘literal Western democracy’ against ‘authoritarian Chinese democracy’. For this to happen, Biden should ensure freedom of religion in the developing world where there should be competition among religions and where Hindus and Muslims (if they want) then can voluntarily convert to other religions (who believe in secularism) including & specially to US-Christianity. For this, Biden should ensure that optional protocol of ICCPR of UN should be converted into mandatory protocol MP-1 where UN can intervene even militarily in case the human rights of the citizens are violated grossly by the erring UN member countries.

(7)- AS far as the horrible denial of human rights in the NAME region, less said the better about the most irresponsible attitude of the US-administrations (present and former especially since Arab spring in 2011). The USA can easily solve their problems by getting elections conducted in troubled countries (Syria, Yemen etc) under secular constitution under the supervision of the UN Peacekeeping Force’ and through the ‘UN Election Commission’. But again the lack of commitment of the USA for secularism is coming in the way of providing succor to such a large section of mankind notwithstanding hollow words of Biden when he said in this address to Congress that - “[America won’t back away from our commitment to human rights and fundamental freedoms. No responsible American president can remain silent when basic human rights are violated. A president has to represent the essence of our country. America is an idea – unique in the world. We are all created equal. It’s who we are. We cannot walk away from that principle]”.

(8)- As far as the nuclear policy of Biden (like of former US-administration) under which Iran, North Korea etc are harassed it can happen only the contemporary world where such doublespeak is permissible where some countries (like 5 permanent members of the UN, Israel, India, Pakistan) have some divine right to have nuclear WMDs but others don’t and that too when denuclearization is the avowed objective of concerned UN-regime for eliminating nukes.

(9)- As far as Afghanistan, again the lack of commitment of the USA for secularism is coming in the way of providing succor to Afghanistan. Peace with justice can easily be brought to Afghanistan if the USA tries for mini-SAARC (of India, Pakistan, Bangladesh, Afghanistan) instead of unethically  surrendering Afghanistan to the communal Taliban. This ‘Federation of Secular Democratic mini-SAARC’ can easily be achieved by the USA:-

(i)- Through plebiscite (A)- In united-J&K (after getting united-J&K free from outsiders) as mandated by the ‘Instrument of Accession’ (IoA) of J&K to India and (B)- Simultaneously in Balochistan, the IoA of which was procured by Pakistan under military pressure despite contrary resolution by Jirga (Parliament) of Balochistan. And

(ii)- By asking India to repeal CAA (Citizen Amendment Act) may be through UN resolution (as it is against international laws) and then by ensuring dual citizenship for about 160 million people of India, Pakistan and Bangladesh (descendants of displaced) because there was no provision of population transfer in ‘Indian Independence Act’ and these were illegally displaced by force during partition.

It is hope that Prez Biden will take not only the threat from ‘authoritarian Chinese democracy’ to ‘liberal Western democracy’  but also to human rights in developing world, seriously in the interest of proving to the world that Americans also believe in Americanism