Why reduce speed limit to 30 km/h? “Answer is blowin’ in the wind”. By Bobby Ramakant 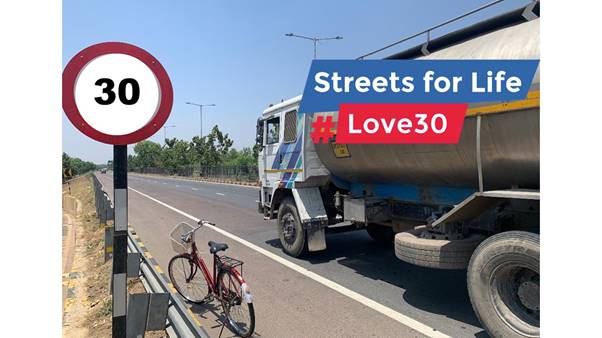 Due to the Covid lockdown in 2020, though the number of road traffic accidents declined yet deaths did not decline in the same proportion because people drive at higher speeds which continued to result in fatal accidents. Every year, more than 1.3 million people die in road traffic crashes – that’s one person every 24 seconds. Excessive speed is at the core of the road traffic injury problem, with 1 in 3 deaths on the roads in high-income countries attributed to speed. It is estimated that 40-50% of people drive above the speed limit, with every 1 km/h increase in speed resulting in a 4-5% increase in fatal crashes. The risk of death and injury reduces considerably when speeds are lowered.

That is why the 6th United Nation Global Road Safety Week (17-23 May 2021) is mobilizing demand in several countries worldwide for low-speed streets which will make our cities not only safe, but also healthy, green and liveable. The Week is highlighting the links between 30 kilometer per hour (or 20 miles per hour) speed limits and attainment of several Sustainable Development Goals, including those on health, education, infrastructure, sustainable cities, climate action and partnerships.

Granddaughter of Nelson Mandela and Global Ambassador for the Child Health Initiative Ms Zoleka Mandela had lost her 13-year-old daughter Zenani in a road traffic crash in South Africa 11 years back. She rightly demanded “We want low speeds, we want liveable streets, and communities where we can walk safely, where our children can get to school unharmed. We call for 30 km/h speed limits. Above 30 is a death sentence.”

“We need a new vision for creating safe, healthy, green and liveable cities,” said Dr Tedros Adhanom Ghebreyesus, Director-General of the World Health Organization (WHO). “Low-speed streets are an important part of that vision. As we recover and rebuild from COVID-19, let’s make safer roads for a safer world.”

Above 30 km/h impact speeds, pedestrians are at considerably greater risk of death. This is even greater for the young and elderly. In the distance a 30km/h car can stop, a 50km/h car is still driving. Higher speeds narrow motorists’ peripheral vision and impact their reaction times. Other studies suggest that there can be a reduction in road traffic crash of up to 6% for each 1 mph speed reduction for urban roads. Overall, the WHO have concluded that an increase in average speed of 1 km/h results in a 3% higher risk of a crash and a 4 to 5% increase in fatalities.

That is why in February 2020, governments endorsed the Stockholm Declaration on Road Safety to address speed management as a key road safety intervention, in particular to “strengthen law enforcement to prevent speeding and mandate a maximum road travel speed of 30 km/h as appropriate in areas where vulnerable road users and vehicles mix in a frequent and planned manner…” The Stockholm Declaration underscores that efforts to reduce speed have a beneficial impact on air quality and climate change as well as being vital to reduce road traffic deaths and injuries. The Stockholm Declaration based its call for low-speed streets on studies from recent decades In cities such as Graz, Austria; London, UK; New York, USA; and Toronto, Canada, which indicated that 30 km/h speed limits and zones yielded reductions – often significant – in road traffic crashes, injuries and deaths. Evidence shows that 30 km/h streets where people mix with traffic not only save lives, but also promote walking, cycling and a move towards zero-carbon mobility.

The 30 km/h speed limits and zones are being replicated in many cities worldwide. This includes in Brussels, Paris and cities across Spain, which from 11 May 2021 mandates in all the country’s municipalities 30 km/h speed limits on dual carriageways and 20 km/h on single carriageways with a pavement which does not differ in height from the road's surface. 30 km/h zones are also being put in place in sections of cities worldwide, from Bogotá, Colombia to Accra, Ghana and Ho Chi Minh City, Viet Nam.

In Tanzania, road injuries reduced by as much as 26%. In Toronto, Canada, road crashes fell by 28% since speed limits were reduced from 40 to 30 km/h in 2015, which led to a reduction in serious and fatal injuries by two thirds. In Colombia, Bogota has included 30km/h zones in a package of measures in its Speed Management Plan that have reduced traffic fatalities by 32%. A study from London found that lower speed limits were associated with a 42% reduction in road casualties, while in Bristol the introduction of 20mph limits was associated with a 63% reduction in fatal injuries between 2008 and 2016.

One of the strong advocates of maximum speed limit of 30 km/h is Lena Huda, who founded 30please.org and said to CNS (Citizen News Service) some weeks back: “I grew up in Germany, which is a car-loving nation, where the car industry is influential. However, I felt much safer there when I walked or cycled. Car drivers did not feel that they “owned” neighbourhood streets. They were watching out for kids and people riding bikes. The presence of children playing on the streets is a welcomed sight in German neighbourhoods- not a reason for an angry Facebook post that children should be “road aware” and not scoot or cycle on the road in front of cars.”

Lena noticed a change when she relocated from Germany to Australia. She said to CNS “I wonder if people really have considered what it means for this generation of children to be constantly supervised and driven to places. Most children in Australia are driven to school even though most children live within 2 km of their school.” She added “I am surprised that kids are not free to ride through their neighbourhoods. I have met many parents worried about road safety; many do not allow their kids to walk to school due to these concerns.”

“The default speed limit in Australia is 50 km/h and around some schools we have tiny school zones with 40 km/h speed limits,” said Lena Huda. “There is less than 10% risk that somebody walking will be killed at an impact speed of 30 km/h but a 85% risk at 50 km/h. That is why I founded 30please.org, a campaign for 30 km/h to be the speed limit in neighbourhoods in Australia. In Wollongong, we have set up partnerships with local organisations to get more children to walk and cycle to school and make it safer. Our kids deserve to be free to ride their bikes in their streets and build healthy habits for their life.”

(Bobby Ramakant is a survivor of a road traffic accident, a World Health Organization Director General’s WNTD Awardee and part of CNS (Citizen News Service) team who cycles and uses public transport since 2014 in India/ Thailand, and gave up his driving license to call for road sovereignty. Follow him on Twitter @bobbyramakant)