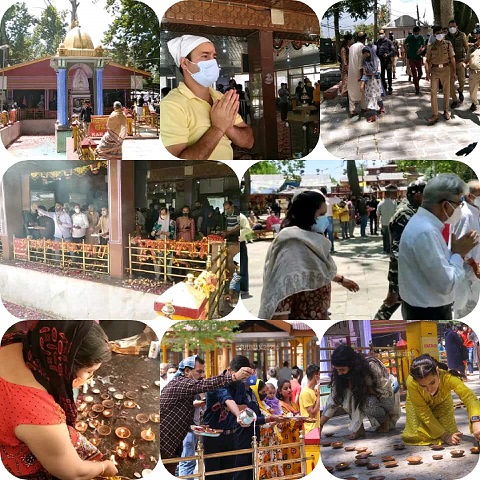 Locals told Wadi ki News that they are celebrating the Mata Kheer Bhawani festival while observing all Covid-19 SOPs. While talking to WKN they said that they prayed to God to wipe out this pandemic from the entire world.

Visitors said that although there has been a significant drop in the number of devotees arriving this year due to Covid-19. It is pertinent to mention that Pandits across the valley and outside throng Tulumulla village of Ganderbal on this day to celebrate the annual festival.

Muslim residents ofTulmulla, and surrounding areas of the Kheer Bhawani temple in Ganderbal district again set an example of religious amity. They displayed religiousharmony by taking part in the mela, ensuring that the Kashmiri pandits celebrate the occasion with fervour. In fact, the harmony and the brotherhoodin the locality, where Muslim and Hindu families live, is very old and established. Mela Kheer Bhawani, one of theimportant festivals of Kashmiri Pandits, was celebrated with religious fervourand gaiety at Tulmulla in central Kashmir’s ganderbal district on 18th of June,Friday.

Hundreds of Kashmiri Pandit devotees, particularly themigrated Kashmiri Pandits, thronged the famous Kheer Bhawani temple associatedwith the Ragnya Devi, a revered goddess of Kashmiri Pandits, located in Tulmulla village of Ganderbal district to attend the annual mela. The devoteesheld the night-long prayers to seek the blessings of the Mata Kheer Bhawani andprayed for peace and prosperity of J&K . Keeping the faith alive hundreds of pandit devotees had come all the way from different parts of the J&K and outside the UT to paying obeisance.

The term Kheer refers to rice pudding that is offered in thespring to propitiate the Goddess, which became part of the name of this reveredtemple. There is also a spring flowing beneath the temple which according tothe belief reflects the future of the valley through the changing colours ofits water.

The annual festival is held here on ‘Jeshtha Ashtami’ whenpilgrims seek the blessings of the deity. According to belief, the goddess changes the colour of the spring’s waters, which are ascribed to different manifestations of the goddess. Turning of the colour into shades of black issupposed to signal approaching disaster while as the milky colour of the springindicates the peace and prosperity for the UT.

Walking barefoot, the devotees carried rose petals andoffered tribute to the goddess as men took a dip in a nearby stream close tothe shrine, which according to the devotees washes their sins.

Meanwhile, the decade long tradition of Hindu-Muslimbonhomie in Kashmir was visible during the festival, where Kashmiri Pandits praised the hospitality exhibited by the Muslim community.

The Muslims of the locality at Tulmulla who greet thevisiting devotees with water, milk, tea, coffee and the cold drinks seem to beequally enthusiastic about the celebration. Many Muslims had established stalls outside the temple premises where they had made the Prasad (Nuts, Sweets andother eatables as a holy gift) to the devotees. Some social groups based in the tents provide free water and other eatables to the guests.

With tears in eyes and roses in hands as a symbol of love,these displaced Pandits folded their hands and prostrated before Mata Kheer Bhawani with the motive of seeking her blessings.