Strategic Significance of Pakistan’s Gwadar Port in the region: Communication Link between China and Regional States? By MD Pathik Hasan 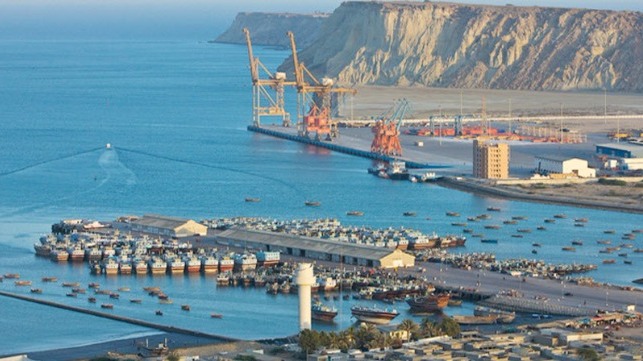 Pakistan’s Gwadar port under the China’s project ‘Belt and Road Initiative’ is going to be one of the top trade hubs in the region, linking the West Asian nations to (Commonwealth of Independent States) CIS countries. ‘China Pakistan Economic Corridor’ (CPEC) has been formed around Gwadar. Although the seaport of Gwadar is in Balochistan in Pakistan, its root is deep in the whole region. A deep link is going to be formed between Asia and Europe centered on Gwadar Port and CPEC.

The huge investment of 60 billion US dollars has taken Pakistan-China relations to the next level. Not only that, CPEC will open a new horizon in Pakistan's trade and commerce. CPEC under ‘Belt and Road initiative, China's multifaceted project will not only connect China's landlocked province of Xinjiang, but also take Pakistan's trade to a new level by taking advantage of Pakistan's unused coastline. This multifaceted project includes the construction of the deep seaport of Gwadar in southern Pakistan and the construction of a wide road from Karachi to Kashgar in China. Karachi, a busy commercial city of more than two crore people, has two huge seaports through which all trade and commerce of Pakistan is conducted. Karachi is the main center of trade and commerce in Pakistan.

The seaport of Gwadar in Pakistan's Balochistan and the Pakistan-China Economic Corridor (CPEC) built around it will boost up Pakistan's economic prosperity. This corridor will reduce the distance between Pakistan and China. The multi-purpose corridor project will establish Pakistan's connectivity with the landlocked province of Xinjiang. Besides, Pakistan's unused coastline will be utilized. The CPEC will connect China's Kashgar with Pakistan's commercial cities of Karachi and Gwadar. Karachi, the world's fifth largest city, already has two ports that cater to all trade and commerce needs in Pakistan.

Balochistan, the largest province by area, is a gem of Pakistan rich in mineral resources. There are immense treasures hidden under the soil of rocky mountainous Balochistan. China's huge investment in Gwadar is like a pearl for Balochistan.

Surrounded by Central Asia, South Asia, Iran and Afghanistan, the Caspian Sea, known as the energy-rich 'Lake', has always been known as an area of peace due to its economic and geographical importance. China has already announced its intention to invest in Chabahar rail link project. China’s contribution to the development of Chabahar port would be a great opportunity for this port to further establish itself as a trade hub in the region since China is currently one of the world’s most advanced countries in terms of maritime and port industries. Gwadar is located at a very important place at the junction of the Energy Corridor in Gulf states and Central Asia. Gwadar plays an important role in fuel transportation in landlocked Central Asia and the western provinces of China. In addition to its economic and business importance, the port of Gwadar is expected to create at least two million jobs in Pakistan, analysts say.

The first part of this huge port was completed in 2006. PSA International company of Singapore operated the first part of the port from 2007 to 2012. In 2013, the port's operations were transferred to China Overseas Holding Company, a Chinese state-owned company. The second phase of work is underway. The second phase of the plan includes work to increase the scope and efficiency of the service. The port of Gwadar has emerged as one of the largest and most important ports in the world under the CPEC.

Located on the southern coast of Pakistan, the seaport of Gwadar is surrounded by the Harjum Strait, the important region of South Asia, the oil-rich Arab Peninsula, and the abundant natural resources of Central Asia. The key to the larger international political game has now shifted from Central Asia to the West. Moreover, the hidden resources in Balochistan, gas, coal, gold, as well as Pakistan's steel-hard friendship with China (Iron Brother) will be a source of frustration for India and Israel, as the agenda of these two anti-Muslim states destabilizes Pakistan.

Balochistan is a paradise for Pakistan. Balochistan is not only for its breathtaking natural beauty but also for its vast natural resources. Balochistan has a lot of resources to enrich not only Gwadar but also Pakistan. The discovery of gold in Chaghai will soon make Pakistan one of the richest countries in the world. Pakistan has been using Sui gas for the last 60 years. The tourist attractions from Jiraat to Jhal and from Bolan to Hingal are special. These sights will attract tourists from all over the world. 600 million tons of iron and 500 million tons of copper were found in Chaghai alone. Concerned quarters are of the opinion that if the Gwadar port is fully operational, it will provide employment to millions of people. The city, centered on the port of Gwadar, will be a planned city from the port, via the highway to the airport, which is a planned city in the United Arab Emirates.

According to Pakistani media, the central government of Pakistan has adopted a new plan for the development of Balochistan. According to the new plan, once the port development of Gwadar, including Balochistan, is completed, Gwadar will be the most developed and beautiful city in Pakistan, which will probably outperform Singapore.

Due to Pakistan’s geographical location and geographical strategy, it would take Pakistan to a higher level of geo-economic development. Gwadar port makes Pakistan a more strategically significant state in the region. It is the clear-cut example of ‘Shifting of Pakistan’s Foreign Policy towards geo-economic from geo-strategy. However, States of Asia, Europe and Africa will be benefitted from this Chinese project. It is going to be a communication links between Asia and Europe.