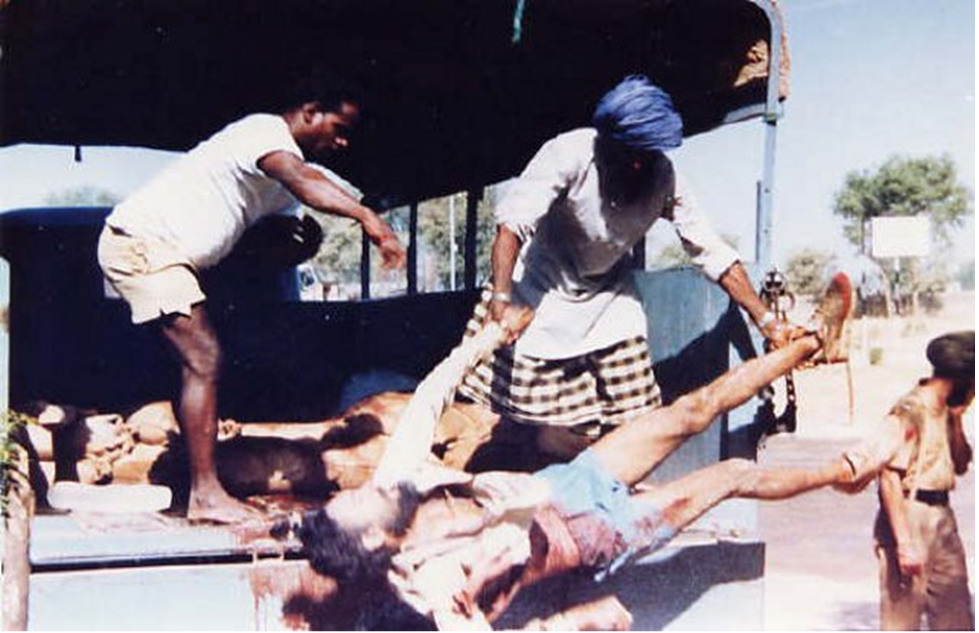 The American Sikh Council (ASC) remembers the start of the horrific Sustained Sikh Genocide (1984 – 1998 planned and perpetrated on the entire Sikh Panth. The entire genocide (Ghallughara) committed against the Sikhs by the Republic of India (ROI) was drawn out over nearly a decade and a half.

First, the Indian government attacked the sacred Sri Darbar Sahib at Amritsar, Punjab without any provocation, killing thousands of innocent Sikh men, women and children on one of the holiest days in the Sikh Religion – the martyrdom of Guru Arjan Sahibji.

Second, the demonic Indian Prime Minister Indira Gandhi who had planned Operation Bluestar and carried out the destruction of the Sri Darbar Sahib had also planned Operation Shanti during the first week of 1984. In order to appease the North and Central Indian caste Hindus which were part of her (cow belt) core vote bank, she drew up a diabolical plan to exterminate all the Sikhs countrywide in early November of 1984 while she simultaneously declared war on Pakistan. This nefarious plan was called ‘Operation Shanti’ (Operation Peace). Beant Singh got wind of this plot of mass extermination of the Sikhs from none other than the PM’s Special Secretary R. K.Dhavan. By assassinating the Indian PM, Beant Singh and Satwant Singh literally saved the Sikh Panth from mass extinction, because Indira was no different than Adolf Hitler who did carry out his plan and murdered six million innocent Jews in Europe. So, the November 1984 pogrom of Sikhs countrywide was a much smaller scaled down version of what was actually prearranged by Indira Gandhi and her evil minions which included members of the Congress and the BJP/RSS.

The age of the internet only started after 1998, with the advent of social media much later. In the period between 1984 – 1998 the entire anti-Sikh narrative was managed and controlled through the massive disinformation apparatus at the disposal of the mighty Indian government.

Media was clamped down on by the central government, especially in an era when there were very few and small private media houses. By and large the Radio and TV were completely government controlled with the owners of all the major newspapers in their pockets and/or otherwise threatened with consequences and told to toe the government’s line. Today with Modi in charge it’s the same again!

Germans were excellent at keeping records, but this was their blunder but a boon for the sane world as the records of the six million murdered by the Nazis were available as proof. The Indian government is well trained by the Brahmin puppeteers, especially when they want to eliminate anyone, they make sure they never keep any records. No wonder many ignorant Sikhs today question whether the Indian government actually killed several hundred thousand Sikhs in Punjab? This is exactly what the Indian government wants! To add insult to injury, most Sikhs have forgotten that the real Sikh genocide was carried out in the killing fields of rural Punjab over a 14–15-year period, while the first week of November 1984 was only a snippet of a preplanned pogrom, which fortunately got highlighted by the world media during that time.

All the Indian Prime Ministers in succession, starting with Indira Gandhi, Rajiv Gandhi her son, Vishwanath Pratap Singh, Chandra Shekar, P.V. Narasimha Rao, till Atal Bihari Vajpayee were all directly involved in the mass human rights violations against the Sikh nation, while the Indian judiciary pretends to be completely blind.

There have been well over a dozen so-called human rights commissions set up by the Indian regime to investigate the horrific crimes but the real intent is to bide time while all the witnesses to the week-long massacre simply pass away.

The Republic of India (ROI) is not the world’s largest democracy as it projects itself to be, but rather a demagogic, authoritarian, minority bashing regime which has two sets of laws. One for the caste Hindus and another for all non-Hindu minorities, but especially Sikhs, Muslims, Dalits, and people of the North Eastern States of that country.

Sikhs in India need to wake up to the fact, that they will never ever get justice for the inhumane crimes committed by various actors of the Indian regime against their people. Decades have passed while the families of the several hundred thousand Sikhs, mostly young men who have been murdered with impunity across Punjab with no accountability, while the Indian regime continued calling the ‘Sustained Sikh Genocide 1984 -1998’, an issue of curbing terrorism. Nothing could be further from the truth.

At a bare minimum the Sikhs of Punjab need to get their act together and actually account for each and every Sikh and non-Sikh who were murdered and disappeared between 1984-1998, because without concrete evidence and hard numbers even the International Court of Justice at the Hague will not entertain a petition.

Also, Sikhs can never ever forget the ‘Sustained Sikh Genocide 1984-1998’ and must do everything in their power to remember this particular long drawn out ‘Ghallughara’ through various activities, within and outside the Sikh Panth.

ASC also continues to present at schools, community colleges, universities and other national forums in order to teach and inform the American public about the hell perpetuated on the Sikhs in India.

ASC has also planned and designed the Sikh Genocide Memorial Plaque, starting in mid-2014. Over 200 of these plaques have been installed at gurdwaras and other locations across the US.

The American Sikh Council (ASC) representatives have worked diligently and closely with the New Jersey Commission of Holocaust Education for over ten years. This monumental effort has finally paid off and starting in December 2014 all information about the ‘Sustained Third Sikh Genocide’ is accessible as teaching material for dissemination across the state of New Jersey so that students from elementary school to high school can learn and be made aware about the atrocities perpetuated by the Indian regime on the Sikhs in Punjab and elsewhere across India through the ‘Sustained Sikh Genocide from 1984-1998’.

The American Sikh Council (ASC) salutes all those brave Sikhs who are still fighting for justice and appeals to the rest to join the movement, in order to remove the Brahmanical shackles