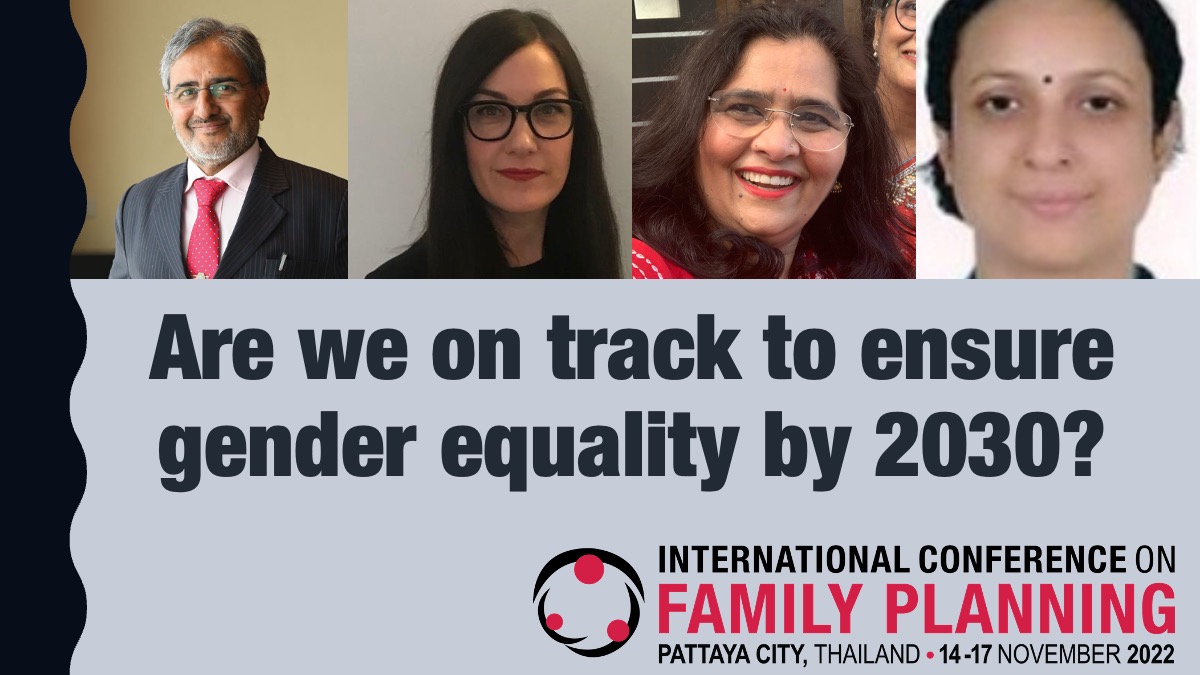 Gender equality is an essential cog-in-the-wheel of human development which is socially just and ecologically sustainable. That is why governments worldwide have committed to deliver on this promise by 2030 along with other sustainable development goals (SDGs). But progress on gender equality and other SDGs has been sketchy and far from satisfactory. With less than 97 months left to meet these goals it is high time to listen to the alarm bells and take corrective actions to try to get on track to deliver on all SDGs, globally including those of gender equality and human rights “where no one is left behind”.

2022 International Conference on Family Planning (ICFP 2022) will be held in Thailand for the first time in the ICFP history. Co-hosted by Johns Hopkins School of Public Health, along with Thailand’s Ministry of Public Health, Royal Thai College of Obstetricians and Gynaecologists, and Population and Community Development Association, this conference is an important forum where a broad range of stakeholders and experts who work on a wide array of issues around sexual and reproductive health and rights will take part. Will ICFP 2022 spur renewed commitments on gender justice?

Progress has happened but not enough, and not everywhere

Agrees Sonal Mehta, South Asia Regional Director of International Planned Parenthood Federation: “We would not have met our gender equality related targets and goals by 2030 even if the COVID-19 pandemic had not hit us.”

A report by UNICEF points out that in all South Asian countries, patriarchal values and social norms keep gender inequalities alive. Discriminatory practices begin even before birth and affect every aspect of a child’s future. Throughout the South Asian region inequalities arising from caste, class, religion, ethnicity and location, are further complicated by severe gender-based discriminations that hold back progress and development for both girls and boys.

During COVID-19, sexual and other forms of gender-based violence against women and girls and other people of different gender identities and expressions, increased dangerously and recourse to justice and reparation was severely jeopardized. There was a high degree of intimate partner violence, said Mehta. She cites a report by UNICEF according to which about 37 percent of South Asian women experience intimate partner violence.

“Profound changes have happened in many countries to increase access to safe abortion, and to ensure young people have access to information and education they need on sexual and reproductive health and rights” said Mina Barling, Director of External Relations of International Planned Parenthood Federation.

The “Marea Verde” or “Green Wave” movement for abortion rights has touched the hearts of young people across Latin America. This community-led grassroots movements led by the youth of Latin American nations are demanding the right to bodily autonomy and sexual and reproductive health and rights.

Landmark progress has happened in Argentina, Thailand, and Mexico in favour of access to safe abortion. For example, Mexico’s Supreme Court ruled that “criminalizing abortion is unconstitutional”. Likewise, in Benin, Kenya, Ireland, young people are crusading for bodily autonomy and right to sexual and reproductive health and rights powerfully, said Barling.

However, countries like the USA made decisions on bodily autonomy that threaten the gains made on gender equality and human rights. “We all watched with horror what happened in the US with overruling the Roe versus Wade decision, and saw those rights ripped away from women” rued Barling. To recall, in 1973 the US Supreme Court had legalized right to safe abortion in Roe vs Wade case, which was sadly and very unfortunately overruled in June 2022 making access to safe abortion a major challenge.

“The onus of family planning should not rest with women alone. Male sterilisation is shamefully low in India and other South Asian countries. This trend has to be reversed. We must incentivise permanent sterilisation both amongst males and females, but more amongst males,” said Dr Amita Pandey, Academic Editor of Asian Research Journal of Gynaecology and Obstetrics, and Professor in Department of Obstetrics and Gynaecology, King George’s Medical University (KGMU) in India.

“Since decades we have seen abysmally low rates of male sterilization compared to very high rates of female sterilization. Males often do not use condoms because ‘they do not enjoy with the condom on’. Such attitudes have to change towards men taking responsibility for not only of one’s own health but of others too. Condoms, for example, protect both sexual partners from HIV and 20-21 other sexually transmitted diseases (STDs), as well as from unintended pregnancy. We must ensure access to male and female condoms for everyone and everywhere, as well as all other science-based prevention options for STDs, HIV and unintended pregnancy,” said Dr Ishwar Gilada, who represents Asia Pacific region on the Governing Council of International AIDS Society (IAS), and is the longest serving HIV medical expert in India.

Do young people have a full spectrum of services to protect them from STDs, HIV, and unintended pregnancies?

An adolescent girl or young woman acquired HIV every two minutes in 2021. “The population of young people today, is the largest ever historically in the world. In Asia Pacific we have about a billion people who are in the age group of 10-24 years with a lot of diversities,” said Sonal Mehta. “But many reports from UN agencies point out that most of the young people are not well prepared or are ill-equipped with insufficient knowledge and they lack life-skills to negotiate safe and consensual relationships.”

Although rates of teenage pregnancy have declined in most parts of the world, they still remain alarming. Child marriages have also declined but in some parts remain a deep concern. Countries are at different levels with rolling out comprehensive sexually education for the young people but this is clearly not enough.

“If I am a 16 year old and I can step into a health setup without being feared or without being tabooed, and ask for a contraceptive, then I think that day the young will be able to ask for a HIV test without any adult consent” said Mehta. In India, those below 18 years of age need parental or guardian’s consent to take a HIV test.

Mehta believes that young people need to be in the driving seat. We need to provide opportunities, safe spaces and enabling platforms where they can speak up with confidence and trust, and access the full spectrum of health and social welfare services.

(Shobha Shukla is the award-winning founding Managing Editor and Executive Director of CNS (Citizen News Service) and is a feminist, health and development justice advocate. She is a former senior Physics faculty of prestigious Loreto Convent College and current Coordinator of Asia Pacific Regional Media Alliance for Health and Development (APCAT Media). Follow her on Twitter @shobha1shukla or read her writings here www.bit.ly/ShobhaShukla)