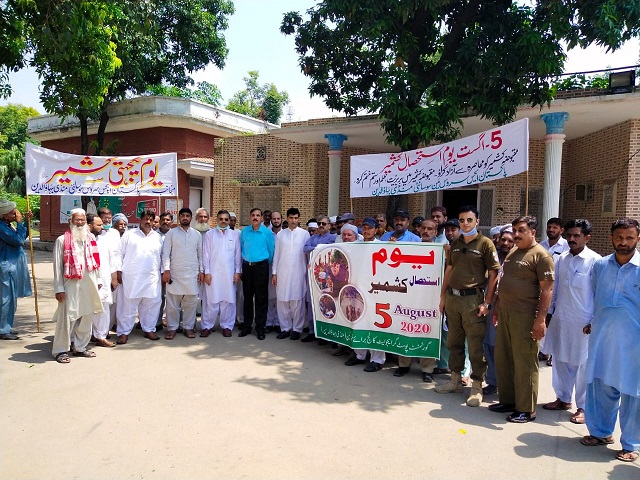 Mandi Bahauddin: Mandi Bahauddin ex-servicemen paid tributes to the people of Indian Occupied Kashmir for their sacrifices in their freedom movement.

The participants were carrying banners inscribed with slogans “Free people of IOK from crippling siege” and “Stop inhume atrocities and human rights violations in IOK”. Earlier at a meeting, the Chief Guest Col Farman Rana, Major Zafar Warriach, Major Hamid Gondal, and Phalia Tehsil PESS President Sub Ashfaq in their address said that 4 August is “the Blackest Day” in the history of Indo Pak.

They strongly condemned the Modi government for illegally annexing IOK as an Indian integral part and permitting Indian citizens from outside of the Kashmir region to buy immovable properties in IOK.

They termed this action of the Modi government as an illegal and gross violation of UN resolutions. They said Modi Government should know that in 1948 Muslim ex-servicemen and Muslim rebels soldiers from Dogra Army with the support of local volunteers got liberated part of Kashmir now called AJK. And now again they are on the beck and call of the Supreme Commander Pakistan Armed Forces to fight shoulder to shoulders with Kashmiri freedom fighters in their struggle to liberate IOK from Indian forces.