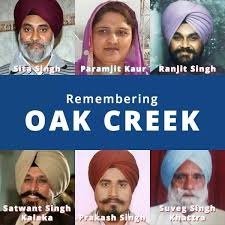 Voorhees, NJ: The massacre at the Gurdwara in Oak Creek, Wisconsin was the first time when a white male targeted a Sikh house of prayer on Aug 5, 2012 in our nation. But this was not the first time that Sikhs have been beleaguered with violent racism.  Hate, bigotry and violence against Sikh-Americans has always been there for more than a century. The crimes against the Sikh religious community has waxed and waned over decades.

There are many factors for the xenophobia by some, against the very distinct turbaned Sikh men and women. Some of those are; societal factors, the role of media, the role of education in schools, the role of the state, specific laws against hate crimes (which are finally in place) and leadership.

In part the extreme rhetoric by the current leadership in our country has taken its toll on Sikh Americans. Based on the current data by FBI, the crimes have risen 300% from 2107 to 2018. Every American President has had a duty to protect all the citizens – equally. Our current President is supposed to do the same, but has failed many minorities, including the Sikh Americans.

Hate crimes always tend to rise when the economy is in a slump. Under the current circumstances due to the prolonged pandemic our economy is in a recession and could go into a depression making it even more difficult for distinguished religious minorities like the Sikhs to be safe while being in any kind of public space.

Every year, Sikh Americans remember the members of their faith who became victims of the mass murder at the Oak Creek, Wisconsin Gurdwara. Six innocents were killed, and many others were wounded. The ones whose lives were taken away that fateful day on August 5, 2012 were Satwant Singh Kaleka, Paramjit Kaur, Sita Singh, Sureg Singh Khatta, Ranjit Singh, and Prakash Singh. Punjab Singh was shot and wounded, finally succumbed from his wounds on March 2, 2020. We will never forget them!

Lt.Brian Murphy who was one of the first responders, a police officer, stood up for the innocents while taking over a dozen bullets to defend the congregants inside the Gurdwara on that fateful day. He was a real hero!

Hate crimes against Sikh Americans have taken place in almost every state in the union on a regular basis and has not spared little children or seniors. It behooves our nation’s leadership at every level to be cognizant of protecting everyone equally and respectfully, so that no one is left behind.

By memorializing this day and remembering the victims each year, all Sikh Americans have an opportunity to reflect and contemplate ways to not only prevent hate crimes but how to proactively engage with the larger society around us in order to make a safer tomorrow.

American Sikh Council (ASC) Vice President Jasbir Kaur stated, “On this day we pray and remember the victims and the families impacted by of the Oak Creek Gurdwara massacre. We hope our nation joins us in remembering this solemn occasion.”