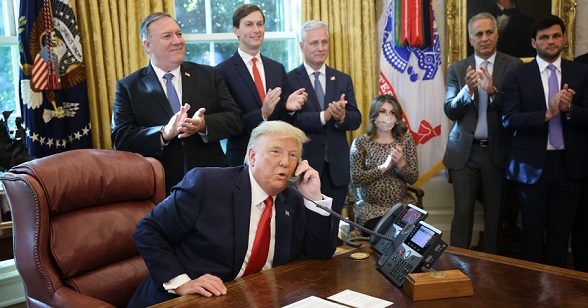 Washington DC: (ChristianHeadlines.com) In what the White House called a “historic deal,” Sudan agreed Friday to normalize relations with Israel, thus becoming the third Middle Eastern and predominantly Muslim country since summer to agree to peace with the Jewish state.

In August, the United Arab Emirates and Bahrain also agreed to normalize relations. Leaders of both nations joined Israeli Prime Minister Benjamin Netanyahu in September at the White House for a signing ceremony as part of what was dubbed the “Abraham Accords.”

“Today’s peace agreement will enhance Israel’s security and end Sudan’s long isolation from the world because of what was taking place,” Trump said. “It will unlock new opportunities for trade and commerce, education and research, and cooperation and friendship for both peoples.”

Days earlier, the U.S. had removed Sudan from its list of state sponsors of terrorism. Osama bin Laden, the mastermind of the 2001 terrorist attacks, lived in Sudan during the 1990s.

The two nations will begin negotiations in the coming weeks on cooperative agreements in “agriculture, economy, trade, aviation, migration issues, and other areas of mutual benefit,” the White House said.

Hamdok, who took office in 2019, said the agreement will help “establish a strong political and economic relation between our nations and the rest of the world.”

Trump called it a “historic deal.”

“This will be the third country where we’re doing this,” Trump said during the Oval Office conference call. “And we have many, many more coming.”

Moments later, Trump said “some very big ones” will be forthcoming.

“It’s peace in the Middle East without bloodshed,” Trump said.

Netanyahu called it “history in the making” and “a glorious day for peace.” He credited Trump.

“I think this truly changes the region,” Netanyahu said. “It changes the lives of all our peoples for the better. It allows us to focus the task of building nations, building our future, building technology, agriculture, environment and health – everything. … It’s just a new world.”

In a statement, Trump said the two sides “are choosing a future in which Arabs and Israelis, Muslims, Jews, and Christians can live together, pray together, and dream together, side by side, in harmony, community, and peace.”

The White House said in a statement that “after decades living under a brutal Islamist dictatorship that supported terrorism,” the people of Sudan “are in charge and democracy is taking root.”

“This is such a momentous agreement,” said Jonathan Alexandre, Liberty Counsel’s senior counsel for governmental affairs. “I lived and worked in Israel in 2012 at the Jerusalem Center for Public Affairs on the relationship between Israel and Sudan. At the time, Israel was considering providing asylum to Sudanese migrants. Yet it faced the security threat of hosting immigrants from a country which had vowed to never normalize relationships with it. To see the sudden shift in policy and diplomacy occur here is awe-inspiring as it was unimaginable eight years ago. Not only does this send shockwaves throughout the geopolitical region, it impacts lives on the ground.”

“When [Trump] took office, the Middle East had been in a state of extreme turmoil for years,” Staver said. “Now more Arab and Muslim countries will likely seek to normalize relations with Israel which will bring peace and prosperity to the region and the people who live there.”