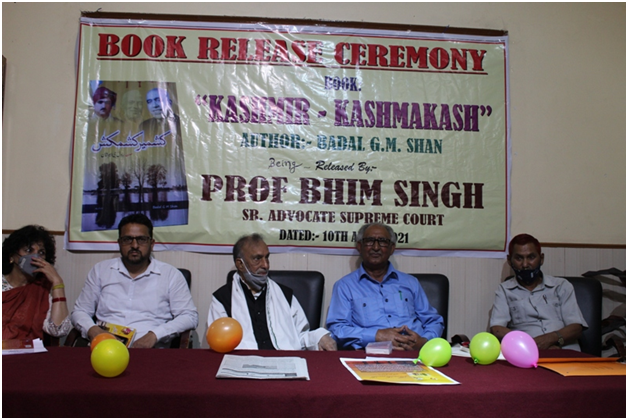 New Delhi: Prof.Bhim Singh, President of J&K National Panthers Party & Sr. Advocate of Supreme Court today released a book, ‘Kashmir-Kashmakash’ written by Badal Ghulam Mohd. Shan with an utmost research about the causes behind uncertainty and political crisis in Jammu and Kashmir for the past 74 years.

Prof.Bhim Singh expressed shock that the present rulers of India from New Delhi have failed to understand the causes and the circumstances that have been responsible for the present uncertainty and chaos in Jammu and Kashmir. While releasing a thoughtful ‘Kashmir-Kashmakash’, Prof.Bhim Singh challenged both the leaders in Delhi and their political agents ruling the State of J&K. He said that the greatest and unforgiveable blunder committed by the Central Govt. was to demolish the statehood of J&K which was founded by Dogra Maharaja Gulab Singh in 1846. He also exposed the Central leaders who, he said, have failed to understand the socio-economic and historical background of the State of J&K which comprised Gilgit & Baltistan and so-called POK since 1947-48. NPP Supremo expressed shock at the mishandling of political affairs and democratic institutions in J&K by the present rulers. He congratulated Ghulam Mohd. Shan, an Advocate & resident of a neglected part of J&K called Gool-Gulabgarh. He appreciated how Mr. Shan entered the University and became an Advocate after his resignation from a teacher’s post in J&K. He admired the contribution of Badal G.M.Shan in cementing the walls of J&K National Panthers Party between Jammu & Kashmir provinces. Mr. Shan shares both cultures of Jammu province as well as Kashmir as he is conversant in both languages, Kashmiri and Dogri.

Prof. Bhim Singh appealed the new generation and the intellectual class both in J&K and the rest of the country to understand the psychological and emotional side of the people of J&K and Ladakh. In his inaugural address, he appreciated Badal Ghulam Mohd. Shan, who has very carefully reproduced important national and international events from the Assembly of J&K to the floors of the Security Council of the United Nations.

Prof.Bhim Singh also hoped that rulers in Delhi shall try to understand the feelings of the people of J&K and try to understand what is the need of the hour to ensure emotional integration of the people of J&K, Ladakh & Gilgit. He also hoped that the new generation may go through the latest book he has released this morning, ‘Kashmir-Kashmakash’ and try to understand who is responsible for the present crisis in J&K. Prof.Bhim Singh said that resolution of J&K is ensuring sincere implementation of the fundamental rights provided in Chapter-III of Indian Constitution which even today stand scuttled by anti-human rights law--J&K Public Safety Act, 1978 which was opposed by Prof.Bhim Singh when he was opposition MLA in J&K Assembly.

Mr. Shan in his brief submission threw light on the contents of ‘Kashmir-Kashmakash’ and said that Kashmir includes Jammu & Kashmir including Ladakh and Gilgit-Askardu also. He only hoped that this book shall be read by all who may belong to any political section in the society. He also ensured that the book, ‘Kashmir-Kashmakash’ shall be reproduced in Hindi and English also so that this idea may reach every citizen of India that these were the political leaders ruling J&K and rest of the country (India) who are responsible for mishandling the political affairs in J&K.

Mr. P.K. Ganju, Sr. Vice President of JKNPP congratulated Mr. Badal Ghulam Mohd. Shan for producing a very reliable and useful political document which gives the message of unity, brotherhood and warns the ruling leadership of Delhi and J&K to ensure that democracy is restored in J&K. He held the leadership responsible for the situation the people of J&K have been facing for 74 years.