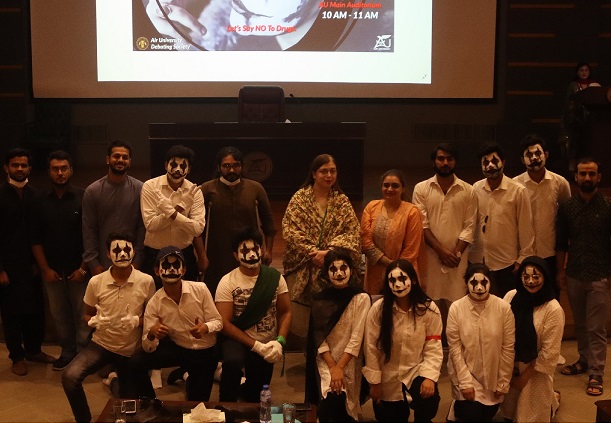 ISLAMABAD: Air University, in connection with the International Day against Drug Abuse and Illicit Trafficking (World Drug Day), has organized an awareness session to strengthen action and cooperation in achieving the goal of a world free of drug abuse.

The event was opened with a highly influential documentary created by a brilliant team of Fazaia Medical College in collaboration with Air Media Club. The documentary depicted the adverse impact of drug addiction on the life of a young man and unacceptance of society for such person and eventually leading to death by suicide.

Dr. Uzma Masroor, the President of Pakistan Association of Clinical Psychologist, Islamabad Chapter, in her keynote address, talked on different psychological effects of drugs and how to overcome the conditions of stress and anxiety. "Each year, individuals like yourself, entire communities, and various organizations all over the world join in on this global observance, to raise awareness of the major problem that illicit drugs represent for society," said Dr Uzma, who is also Chair Department of Humanities, Education and Psychology, Air University and a certified trainer of Hypnosis, NGH-USA and NLP, NF-NLP, USA.

The event was concluded with closing remarks by Fazaila Ali Qazi, Director Student Affairs in which she highlighted various steps for the awareness, monitoring, disciplinary procedures as well as the rehabilitative support such as psychological counseling, medical care, help line and anti-drugs team at university level being initiated through the visible commitment and support of Vice Chancellor Air University.

"Air University stands strong with its commitment to a drug free and smoke free university and realizes the importance of this fatal abuse," the director said, adding that new policies are being developed for the eradication and prevention of smoke and drug usage, distribution & sales at campuses and many more, to ensure a drug and smoke free campus.

The event was organized by Directorate of Student Affairs, Air University, with collaboration of AU Debating Society & AU Thespian Society. Apart from the main theme it was also an effort to spread awareness about drugs and their addiction. The event also included an oath taking ceremony by the staff and students to help fight the battle and challenges of drug abuse and rehabilitation in society.