Kashmir: A case of world apathy' panel held in Istanbul 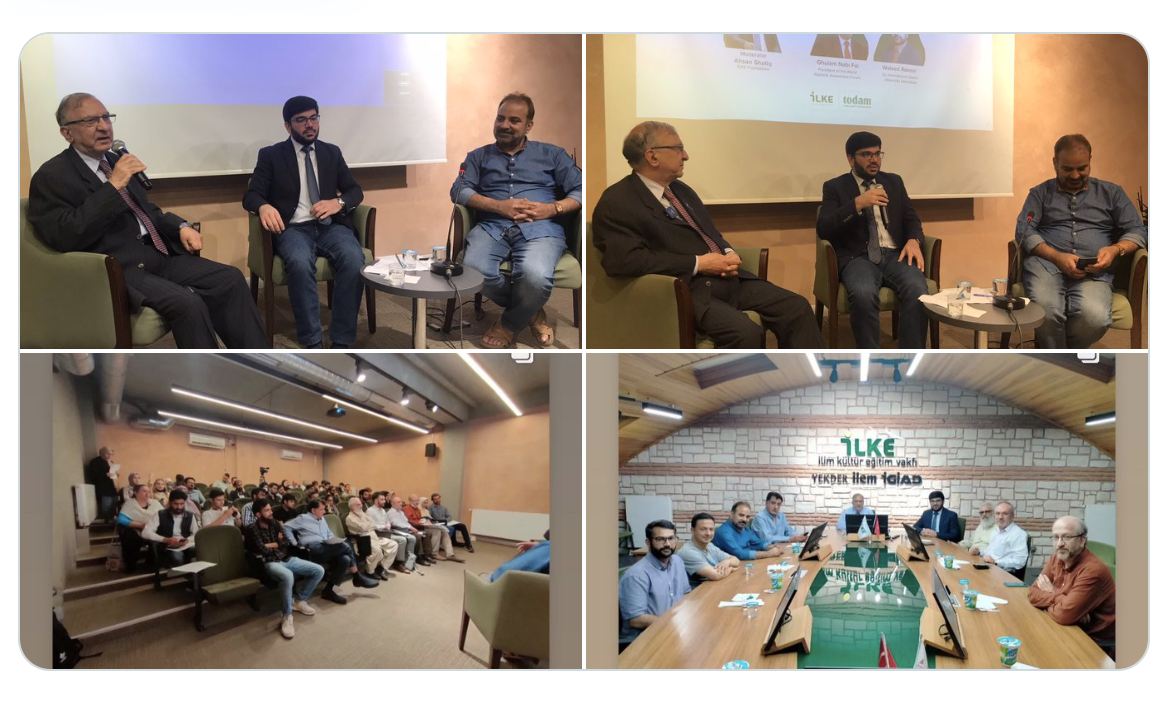 Istanbul, Turkey: A panel discussion took place at ILKE Science, Culture, Education Foundation, Istanbul, entitled, “Kashmir: A Case of World Apathy.” Panelists included, Dr. Ghulam Nabi Fai, Secretary General, World Kashmir Awareness Forum & Dr. Waleed Rasool, Professor at Riphah University, Islamabad. The emcee was Ahsan Shafiq Butt, foreign relations coordinator at the Foundation. Ahsan Shafiq, an energetic and scholarly personality, who said that Kashmir has been victim of World’s apathy rather hypocrisy. Yet we Muslims need to take the lead even if it means small steps and not leaps to make a difference.

ILKE Foundation, established in 1980’s, produces information, policies and strategies, conducts research that will guide decision makers, and contribute to the formation of the necessary knowledge for the future. ILKE Foundation has contributed so far in the fields of education, business ethics, civil society, law and management. It produces charity-oriented work for the purpose of living within the framework of Islamic and human values, conducive to living, and pioneering the realization of a transformation in this direction in society. While doing this, ILKE Foundation cares about taking into account the spirit of the time and the needs of the day, and consultation and cooperation with institutions that carry out similar studies. ILKE Foundation believes that a life should be aimed at serving humanity and humanity alone.

Answering a question, Dr. Fai said that the people of Kashmir understand that India’s obdurate stand has been effective in creating the impression among policy makers of the world powers, including the United States that the idea of plebiscite is unworkable, although, the United States and Britain have traditionally been committed supporters of the plebiscite agreement as the only way to resolve this issue. They sponsored all the Security Council resolutions which called for a plebiscite. Plebiscite became a matter of controversy only after India realized that she could not win the people's vote. Fai also added that when the Kashmir dispute erupted in 1947-1948, the United States championed the stand that the future status of Kashmir must be ascertained in accordance with the wishes and aspirations of the people of the territory. The United States was the principal sponsor of the resolution # 47 which was adopted by the Security Council on 21 April 1948, and which was based on that unchallenged principle.

Responding to a question of popular sentiments of the people towards the freedom struggle, Fai explained that the scale of popular backing for it can be judged from the established fact that, on many occasions since 1990, virtually the entire population of Srinagar came out on the streets in an unparalleled demonstration of protest against the oppressive status quo. The further fact that they presented petitions at the office of the United Nations Military Observers Group (UNMOGIP) shows the essentially peaceful nature of the aims of the uprising and its trust in justice under international law. India has tried to portray the uprising as the work of terrorists or fanatics. Terrorists do not compose an entire population, including women and children; fanatics do not look to the United Nations to achieve pacific and rational settlement, Fai said.

Fai referred to the report issued by the U.N. High Commissioner of Human rights which underlines this fact by stating; “While Indian-Administered Kashmir has experienced waves of protests in the past—in the late 1980s to early 1990s, 2008 and 2010—this current round of protests appears to involve more people than the past, and the profile of protesters has also shifted to include more young, middle-class Kashmiris, including females who do not appear to have been participating in the past.”

Fai agreed with the questioner that Kashmir struggle has been met with studied unconcern by the United Nations. This studies unconcern has given a sense of total impunity to India, responded Dr. Fai.  It has also created the impression that the United Nations is invidiously selective about the application of the principles of human rights and democracy. There is a glaring contrast between the outcry over the massacre in Ukraine, on the one side, and the official silence (barring some faint murmurs of disapproval) over the killing and maiming of a vastly greater number of civilians in Kashmir and the systematic violation of the 1949 Geneva Convention. Fai added that it is the moral obligation of the world powers to respond to the pain and suffering of innocent civilians of Ukraine, however, they should not turn the blind eye towards the pain and suffering of other international conflicts, including Kashmir.

Fai told the wide audience which included faculties, students, members of civil society that Yasin Malik, one of the most elevated and prominent leaders of Kashmir political resistance movement is a peace maker. Yasin Malik dedicated his life to convince the leadership of both India and Pakistan as well as important world capitals, including the United States that the only way to resolve the Kashmir conflict was through peaceful negotiations between all parties concerned – India, Pakistan and the Kashmiri leadership. The life sentence is share sickening and extremely abhorrent. World community must intervene to let justice prevail. We hope the time has come the world powers will end its apathy and insensitivity towards Kashmir, Fai hoped.

Dr. Waleed Rasool articulated the Kashmiri perspective in these words, “Kashmir is neither  part of India nor Part of British India therefore, none of the Indian laws are applicable in Kashmir.

Kashmir dispute is legitimate international dispute as per UN resolutions and International law. India occupied Kashmir in 1947 and reannexed it in 2019, therefore, India is aggressor and occupier.

Dr. Rasool added: ‘Since Kashmir was not a sovereign part of India, therefore, the resistance movement is neither a separatist movement nor successionist but movement of right to self-determination which demands implementation of the UN resolutions - that sanctifies the Kashmiri freedom struggle.

The agenda setting and framing of disinformation campaign by Indian intelligence agencies of legitimate Kashmiri struggle needs the intellectual support of academics and scholars to distinguish the falsehood from the truth and reality, Rasool explained.

Dr. Rasool emphasized that Kashmir has no geographical, historical or cultural relationship with India. We appeal the world community not to see the Kashmir tragedy from the lenses of either India or Pakistan but purely from humanitarian and objective lenses.

Aslan Balci of Anadolu Agency said, "It was a very useful panel about, Kashmir under Indian occupation. We listened and heard very useful words from Dr. Ghulam Nabi Fai and Dr. Waleed Rasool.

Dr. Fai can be reached at: