Is HIV epidemic outpacing the AIDS response in Asia Pacific? By Bobby Ramakant 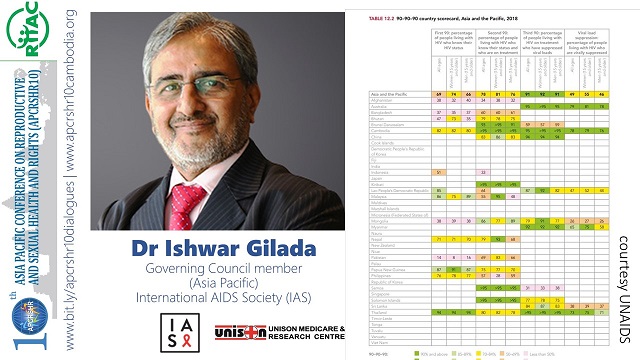 With nine months left to meet the HIV-related 2020 targets, we are not on track to end AIDS by 2030. In Asia Pacific region, despite unprecedented progress initially in scaling up HIV programmes for prevention, treatment, care and support (in different countries and key populations), we are still lagging way behind. The UNAIDS (Joint United Nations programme on HIV/AIDS) report succinctly observes "Asia and the Pacific boasts some of the earliest successes in responding to the HIV epidemic. The region's response, however, is highly uneven, and several national HIV programmes are not keeping pace with their growing HIV epidemics. Creeping complacency in other countries risks squandering gains made thus far."

Dr Ishwar Gilada, Governing Council member of International AIDS Society (IAS) from Asia and the Pacific, and President of AIDS Society of India (ASI) was the keynote speaker for APCRSHR10 Dialogues co-hosted by 10th Asia Pacific Conference on Reproductive and Sexual Health and Rights (APCRSHR10) and CNS. He was among the first medical doctors to begin HIV care when first case got diagnosed in the country. Despite the challenges posed by Corona Virus Disease (COVID-19), APCRSHR10 Dialogues testifies the commitment to continue virtual/ online learning, information exchange and knowledge sharing on range of issues related to sexual and reproductive health and rights (SRHR).

According to UNAIDS, at least three quarters of new HIV infections in the region are among key populations and their sexual partners. This highlights the need for legal reforms and other initiatives to reduce the discrimination and marginalization faced by these populations, and for increased support for community-led activities. Gay men and other men who have sex with men are experiencing rapidly growing HIV epidemics in several countries, with young men especially at risk. Amid an increase in the availability of heroin - and little improvement in the availability of harm reduction services - a resurgent epidemic is underway in some locations among people who inject drugs. Despite legislative reforms and other progress, shrinking civic space and stigma and discrimination against people living with HIV and key populations stand in the way of more rapid progress against the epidemic.

The 2020 targets are to ensure 90% of people living with HIV know their status, 90% of these are receiving lifesaving antiretroviral therapy (ART) and 90% of these have undetectable levels of the virus.

Globally, 37.9 million people are living with HIV, 79% know they are HIV positive, 60% of these are on lifesaving antiretroviral therapy (ART) and only 53% of the people living with HIV have undetectable levels of the virus.

In Asia and the Pacific region, 5.9 million people are estimated to be living with HIV. Out of these, 69% knew their status, 78% of these were on lifesaving ART, and 49% of people living with HIV were virally suppressed. And it is no surprise that these targets are far less met for key populations (such as, sex workers, gay men and other men who have sex with men, people who use drugs, transgender people and prisoners). Currently, there are 310,000 new HIV infections in Asia and the Pacific region. New infection rate has declined but is quite far off from the 2020 target. The region is also not on track to meet the 2020 target to reduce AIDS related deaths.

Not ensuring that every person living with HIV is virally suppressed, is a missed opportunity to prevent onward transmission of HIV and to reduce AIDS-related deaths, said Dr Ishwar Gilada. Scientific evidence has shown that if every person living with HIV who is on antiretroviral therapy (ART) and has undetectable viral load, then his/her risk of transmitting HIV becomes negligible, and the person can lead a normal healthy life commensurate to the principle ‘Undetectable = Untransmittable’ (U equals U). "Some partial success must not set in any complacency. The World Health Organization (WHO) guidelines 2016 recommend routine viral load monitoring should be carried out at 6 months, at 12 months and then every 12 months thereafter if the patient is stable on ART. It is very important to scale up viral load testing in India and every other nation, to monitor the viral load suppression" said Dr Gilada.

Every new case of HIV transmission is an opportunity to do a reality check on how it could have been averted. Every case of, late or missed HIV diagnosis; delay in putting people living with HIV on treatment; stigma and discrimination blocking access to care; or people living with HIV not being virally supressed; are among reality checks we cannot fail to miss, if we are to end AIDS. These reality checks will inform us of corrective actions that are needed to be on track to end AIDS. Most importantly, game changing insights of finding solutions that will work in local contexts of communities and regions, come from people who are most affected. We must ensure that all people living with HIV know their status, all of them receive antiretroviral therapy (ART) and remain virally supressed, and no further transmission of HIV takes place, thereby making Undetectable = Untransmissible (U=U) a reality, said Dr Ishwar Gilada.

“UNAIDS targets of achieving 90-90-90 are not only critical but central to meet these goals. But no less emphasis should be given to ensure that while we progress towards (and beyond) 90-90-90, we must also optimally utilize every scientific, evidence-based prevention option, so that new HIV infection rates decline steeply to hit zero as soon as possible. Whole concept of epidemic control lies not only in reaching the treatment targets of diagnosis, treatment and viral suppression, but also it has to include essential needs of primary prevention, stigma reduction (ideally elimination) and human rights-based approaches” remarked Dr Ishwar Gilada.

Dr Gilada shared that AIDS Society of India had advocated for a strong policy to combat HIV stigma. The HIV/AIDS (Prevention and Control) Act 2017 in India is an important milestone, as the law has several provisions to strengthen HIV care for people living with HIV and prevent their discrimination and human rights violations. But a lot more progress needs to happen on law enforcement to advance HIV care with dignity.

With only 129 months left to end AIDS by 2030, we need to reflect urgency in improving the HIV response, in every country, as well as for every key population - we need to walk-the-talk on 'no one is left behind' principle. "We need to deliver with what we have today, which means comprehensive prevention (such as condoms, oral pre-exposure prophylaxis (PrEP), Post-Exposure Prophylaxis (PEP), and other evidence-based tools to prevent HIV transmission), human-rights based approaches, along with scaling up treatment, support and care."